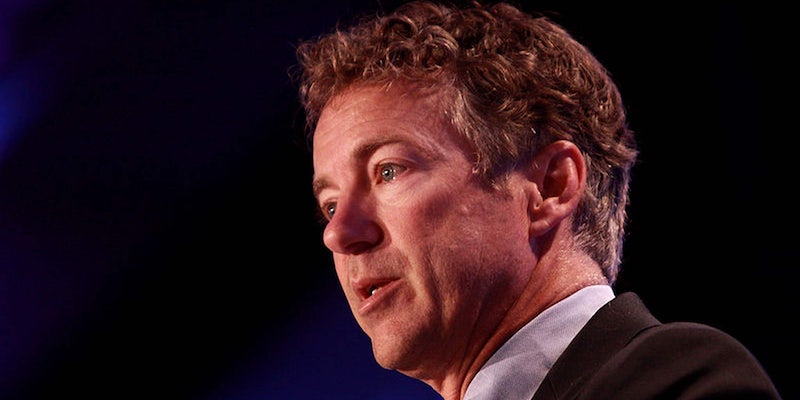 In the hours after a Staten Island grand jury declined to indict NYPD officer Daniel Pantaleo for putting Eric Garner in a fatal chokehold, Sen. Rand Paul (R-Ky.) did one of the things he does best: go on TV.

On MSNBC’s Hardball with Chris Matthews, the show’s host asked Paul the one question that was on everybody’s mind (other than how a grand jury could have let off Pantaleo when a video showed him choking a man to death, who was yelling “I can’t breathe,” for selling loose cigarettes on the street).

“How do we bridge the gap between white and black at this time when these type of situations, like what just broke in New York in the Garner case,” asked Matthews. “How do we do it? How we get past it?”

Paul’s response was odd to say that least:

It’s hard not watch that video of him saying, ‘I can’t breathe, I can’t breathe’ and not be horrified by it. But I think there’s something bigger than just the individual circumstances. Certainly, I think the individual circumstances are important, but it’s also important to know that some politician put a tax of $5.85 on a pack of cigarettes, so that’s driven cigarettes underground by making them so expensive. But then some politician also had to direct the police to say, ‘We want you arresting people for selling a loose cigarette.’ For someone to die over breaking that law, there really is no excuse for it. But I really do blame the politician because we put the police in a difficult situation with bad laws.

Paul is a libertarian. He’s the scion of America’s first family of libertarianism. It shouldn’t be a surprise that he sees things through the lens of “big government bad; free market good.”

So, does his argument hold water? Let’s take a look.

Cigarette taxes exist inside of a category called Pigovian taxes, which are levied as a way to reduce the consumption of certain goods and services that the government wants to discourage, due to their negative externalities, but doesn’t want to prohibit outright. In the case of cigarettes, the negative externalities are that the carcinogenic effects of cigarette smoke cost the country $133 billion in direct medical care and $156 billion in lost productivity each year. Those numbers are mind-bogglingly enormous; but, for the nearly half a million people who die from smoking in the United States every year, they’re also difficult to appreciate.

The goal of cigarette taxes are explicitly to make cigarettes more expensive so fewer people can afford to purchase them. It’s a strategy that works. A recent study conducted by the Congressional Budget Office found that increasing cigarette prices by ten percent can result a decrease in smoking rates of up to seven percent in adults and 15 percent in teens.

Paul’s case against these kind of taxes is that its not only allowing the government to pick winners and losers through tax policy, which should exclusively be used for low levels of revenue generation rather than affecting policy, but it also creates an illegal black market because it gives people additional incentive to avoid those taxes. Certainly, as New York’s cigarette taxes have increased, so has its of level tobacco smuggling and tobacco-related tax evasion.

It’s an argument that Paul can make and its one that the libertarian Reason magazine made as recently as yesterday, though the timing of publication seems to have been a coincidence. But just because he can make this argument doesn’t mean he should—especially  because the senator has already proved he has a much more nuanced understanding of the racial dynamic at work here.

In a Time op-ed earlier this year about the widespread outrage over the death of African-American teenager Michael Brown in Ferguson, Mo., Paul acknowledged that the problem isn’t that laws exist for black people to break, it’s that they are targeted by police for committing the same sorts of offenses that cops often ignore when they’re committed by white people.

Given these developments, it is almost impossible for many Americans not to feel like their government is targeting them. Given the racial disparities in our criminal justice system, it is impossible for African-Americans not to feel like their government is particularly targeting them.
…
Anyone who thinks that race does not still, even if inadvertently, skew the application of criminal justice in this country is just not paying close enough attention. Our prisons are full of black and brown men and women who are serving inappropriately long and harsh sentences for non-violent mistakes in their youth.

Paul’s response to Matthews seemed tone-deaf not only because answering a question about bridging the gap between the races by talking about the need to cut taxes is literally a punchline used by the laziest liberal comedian ever, but because he knows taxes are not the issue.

Millions of people around the country aren’t angry just because an NYPD officer strangled a man to death for evading a few cents in taxes, it’s because that very action was taken largely because of who Garner was and what he likely represented in the eyes of the officer. Extending that logic from Ferguson to New York City isn’t difficult.

While Paul may have dropped that line of thinking in favor of spouting to talking points so cliché they border on parody, a bunch of people on Twitter have spent much of the last 12 hours picking up the slack. After the grand jury’s decision, a hasthtag popped up called  #CrimingWhileWhite that saw white Twitter users recounting their experiences of being let off for minor crimes that could have resulted in stiffer penalties if they were black.

I shoplifted when I was 14 and they let me go because my parents came down and we "looked like a nice family." #crimingwhilewhite