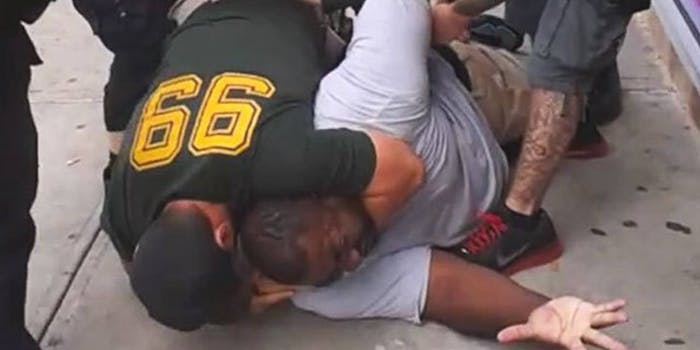 The New York City police officer who choked and killed Eric Garner will not face criminal charges, a Staten Island grand jury voted on Wednesday, the New York Times is reporting based on an unnamed source briefed on the matter.

Officer Daniel Pantaleo choked Garner to death after he confronted him for allegedly selling untaxed cigarettes.

The decision to not bring charges against Pantaleo comes just one week after a St. Louis grand jury voted to not indict Ferguson, Mo. officer Darren Wilson who shot and killed 18-year-old Michael Brown.

In both cases, the officers involved were white, while the men who died were black and unarmed.

Garner, 43, was an asthmatic father of six children, who died when Pantaleo employed a chokehold that was banned by the NYPD more than 20 years ago. The incident exploded when a YouTube video of the entire event showed that Garner’s last words were “I can’t breathe.”

In the wake of violent protests in Ferguson following the Wilson decision, New York City police commissioner Bill Bratton warned of “outside agitators” as they braced for potential backlash.

“The irony of what we’re dealing with in New York is we have the New York community, the people who live here, and then we have a lot of outside agitators who come in for these events,” Bratton said on CBS Wednesday morning.

Members of the NYPD’s intelligence unit were sent to Ferguson to “take a look at who was there. There were quite a few agitators that were there in Ferguson,” Bratton added.

It’s not clear whether Pantaleo will return to duty.