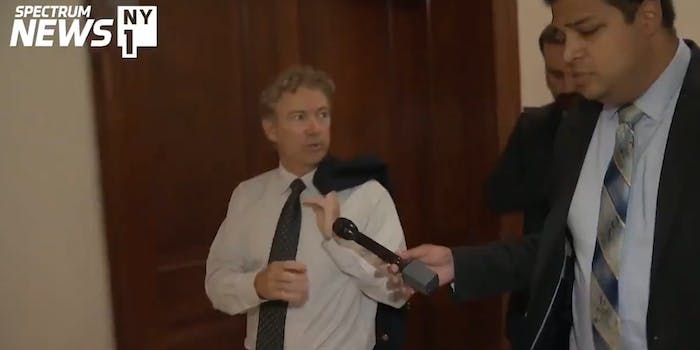 Paul has faced criticism after his 9/11 Victims Compensation Fund decision.

Sen. Rand Paul (R-Ky.) dodged questions from a New York 1 reporter on Thursday regarding his decision to halt a bill that would have reauthorized the 9/11 Victims Compensation Fund.

Paul’s decision garnered a torrent of criticism, including from comedian Jon Stewart, who has advocated on behalf of the fund.

New York 1 released video of one of their reporters trying to ask Paul about his decision—where he objected to a call from Sen. Kirsten Gillibrand (D-N.Y.) to approve the bill by unanimous consent—and shows the Kentucky lawmaker walking away, not answering repeated questions for around a minute. Paul believed that funding would need to be cut elsewhere to offset the cost of the bill.

“If you watch Fox News, we just did an interview on Fox News, and there’s a lot of good information on there,” he said. “If you’ll tell your viewers to tune into Fox News, we have some great stuff on there.”

Paul then said if New York 1 was a “professional outlet,” they would have tried to schedule an interview. The reporter said they tried to do so.

Our @JVittalTV on Thursday questioned Kentucky Senator Rand Paul about his objection to an attempt to quickly pass a bill ensuring the 9/11 Victim Compensation Fund never runs out of money. Here is video of their exchange. pic.twitter.com/Dxx3yEnGlp

Paul was referring to a Fox News interview on Thursday where he shot back at Stewart’s blistering criticism of the senator’s decision to halt the bill.

“I know Jon Stewart, and Jon Stewart is sometimes funny and sometimes informed,” Paul said. “In this case, he’s neither funny nor informed. I’ve spent my entire Senate career putting forward ‘pay-fors’ for any time spending is expanded.”

He also said Stewart was part of a “left-wing mob.”

The Senate is expected to vote on the legislation next week, along with amendments from Paul and Sen. Mike Lee (R-Utah) that address the spending, according to the Washington Post.