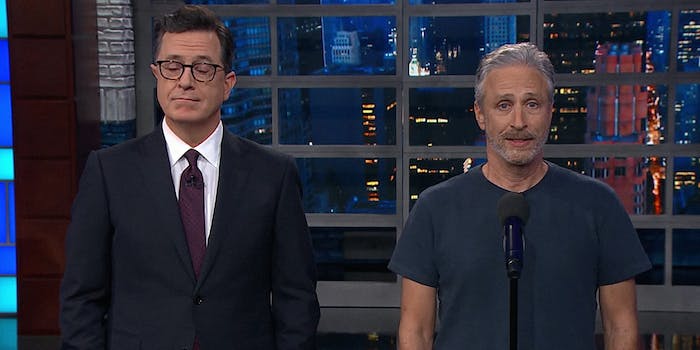 Colbert supports Trump on this one thing.

Last weekend, President Donald Trump took time away from some of his numerous other feuds to blast away at late-night host mocking him, complaining that he deserves a reciprocal amount of coverage praising him under the Equal Time rule, from which talk shows are explicitly exempt.

Regardless, Stephen Colbert heard the president and decided to acquiesce to his demands, bringing out a special guest to present the side the president wants: former Daily Show host Jon Stewart.

The first positive thing Stewart could say about the president was that he was “not a cannibal.” And it goes downhill from there.

Stewart said he’d rather have Trump in office than have hot lava poured down his pee hole (but only barely) and that Trump was better for women than Harvey Weinstein—the Hollywood mogul accused of sexually harassing women for decades—before finally and completely losing it.