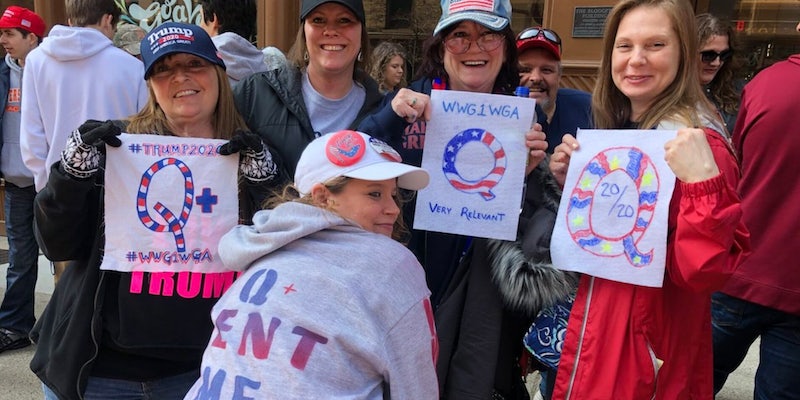 It was practically a lovefest.

QAnon is the ever-changing conspiracy theory that sees Trump at the center of a secret effort to root out deep state saboteurs, pedophiles, and anti-Trump elements supposedly at the heart of the government. And the only reason we’ve been let in on this secret war between good and evil is because of the efforts of a military intelligence insider called “Q” who feeds cryptic intelligence and hints of things to come to the message board 8chan.

Like any good sports fan, QAnon believers show their allegiance through purchases: T-shirts, hats, pins, signs, and books. And in August, when they showed up to Trump’s rally in Tampa wearing their Q gear, the world finally took notice of the conspiracy theory that had been steadily growing for a year—and whose rhetoric was getting more violent.

The Secret Service responded by allegedly not allowing Q gear to be worn into subsequent rallies, though in keeping with their silence about presidential protection, the agency never made an actual announcement.

Whether the ban was formal or informal (the Secret Service and Department of Homeland Security didn’t respond to requests for comment), it appeared to no longer be in force. QAnon followers showed up in full splendor, posing in t-shirts, hats, pins, badges, and with signs.

Made it to the rally #MAGA #QAnon #WWG1WGA #GrandRapids pic.twitter.com/qVnldJMNH1

One of the Q poster’s favorite techniques to keep the faithful happy while his predictions fail to come true is shouting out their tweets in his 8chan drops. With the Grand Rapids rally, Q made a concerted effort to single out and applaud the merch-wearing of a number of attendees.

To Q believers, almost nothing means more than being “Q-ed” on Twitter by QAnon. And Q gave dozens of followers the ultimate sign of his approval, like a digital laying on of hands by a guru or a knowing nod from the Pope.

Starting hours before the rally, Q began posting random tweets featuring Q believers decked out for the big rally, and thanking them for being “VIP patriots.” The glorifying went on for hours, with Q making over 40 drops spotlighting pictures of rally attendees, rally watchers, and even just people flying American flags.

More shoutouts from QAnon to "VIP's" at the Trump rally in Grand Rapids tonight. Feels like we could be in for a repeat of the Tampa rally where Q went mainstream. Let's hope not. pic.twitter.com/jqBkkhaH8n

Their patriotism was complimented, and their efforts were seen. Each tweet flagged, in turn, drew hundreds or even thousands of responses from other Q supporters on Twitter, which is almost always the case when Q spotlights a tweet.

The effect was an undeniable frenzy of excitement both in the arena and online. Spotlighted tweets were getting thousands of shares, and provoking positive comments all over the Q social media sphere, like a religious revival where most of the attendees aren’t actually in the room.

It was also apparent outside the rally, where a video popped up of someone going down the waiting line with a sign reading “Make Noise 4 Q” and people shouting Q slogans.

I've been covering Qanon for a year, and the amount of pro-Q people in this video from yesterday's Trump rally line in Grand Rapids is absolutely shocking. This is just a portion of it. pic.twitter.com/hTDGEnPsEi

There was even a burgeoning conspiracy theory that started during the run-up to the rally–that a “fake MAGA” had infiltrated the crowd in the guise of a newly awakened Q believer, and was planning to do harm to the president. How did Q followers know? He was wearing an “antifa button” declaring “punch your local Nazi.”

Such conspiracy theories within conspiracy theories are common in QAnon, where believers have concocted a number of deep state assassination attempts based on thin strands of evidence. Likewise, there’s no evidence that this person was anything other than a person who both follows Q and doesn’t like Nazis

. But even just the hint of something amiss was enough to set off alarm bells. After being “Q-ed” and “exposed,” the nascent patriot tweeted that he’d compiled and taken off his anti-Nazi button.

Wasn’t aware it was an antifa Branded pin. It has been removed. Horned Hillary hat remains.

With the frenzy of Q drops and gear, the stage was all set for Trump to make a direct, vocal mention of QAnon—a vindication of the conspiracy theory that would have a dramatic effect on its trajectory.

That didn’t happen. Trump has never spoken of Q before, and none of his allies in the media have ever asked him about it. It’s not even clear if Trump knows what QAnon is, or that it exists. But he did throw out just enough indirect mentions to keep the amped-up faithful believing.

For one thing, Trump used the phrase “these people are sick” to refer to Democrats continuing to push for the release of Special Counsel Robert Mueller’s full report. But while Q uses the phrase often, its place in Trump’s lexicon dates back to at least 2016, and is a case of Q picking up something Trump already does and claiming it’s the opposite.

The president also made a cryptic reference to “fighting for our lives,” which Q researchers took for a reference to supposed grand plans of the deep state to depopulate and cull the earth—a touchstone of the conspiracy community for decades. He also made a quip about Democrats being on “artificial respirators,” seen as a nod to the conspiracy theories regarding Ruth Bader Ginsburg possibly being kept alive mechanically.

Sadly for the faithful, none of these were a direct mention or acknowledgment. The closest Trump actually came was his tweet featuring pictures of the rally, the last of which features a solitary “Q” sign.

That nod was enough for some.

And so, the rally ended in more disappointment, with an avalanche of bad publicity from mainstream sources and QAnon’s fabled “great awakening” no closer to being unleashed.

But at least a lot of people got “Q-ed.” And so, the movement will go on.