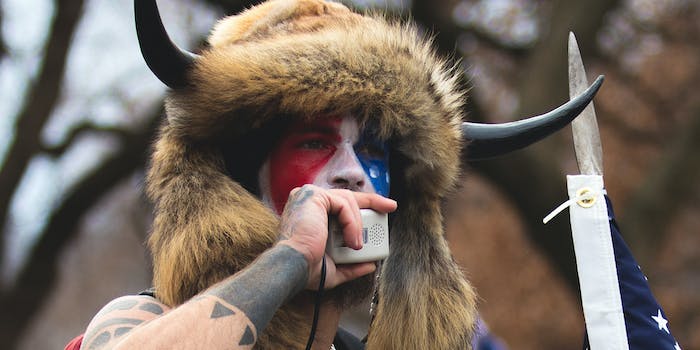 Jacob Chansley could serve anywhere from 41 to 51 months in prison.

Jacob Chansley, known best as the “QAnon shaman,” pled guilty on Friday for his role in the Jan. 6 riot at the Capitol, according to reports.

Seen by many as the face of the failed insurrection, the 33-year-old Chansley, who has been in custody since his arrest in January, plead guilty to one count of obstructing a proceeding of Congress. Chansley accepted a plea deal, according to CBS News.

Although the charge can bring a sentence of up to 20 years in prison, prosecutors, who dropped the other 5 charges against Chansley, are expected to deliver a much lighter sentence.

CBS News reports Chansley could expect to serve anywhere from 41 to 51 months in prison with credit for the time he has served so far. He also will pay $2,000 in restitution.

QAnon is a conspiracy theory that believes former President Donald Trump was part of a secret war to arrest Democrats who are pedophiles and cannibals. During the riot, Chansley was photographed in face paint and a horned helmet inside the Capitol.

Prosecutors made specific mention of a note left by Chansley in the Capitol which stated that “it’s only a matter of time, justice is coming.” Albert Watkins, Chansley’s lawyer, has argued that his client was non-violent during the riot.

In an interview earlier this year, Chansley tried to defend his actions at the Capitol by saying he “actually stopped somebody from stealing muffins out of the break room” and that he wanted to “bring God back into the Senate.”

Chansley is just one of nearly 600 individuals charged so far for their involvement in the Jan. 6 riot, which erupted as a result of debunked conspiracy theories regarding fraud during the 2020 presidential election.