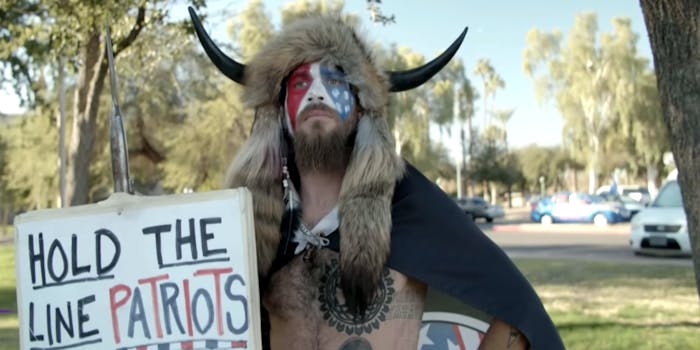 'It demonstrates and reinforces my client’s long-standing status as a peaceful, non-violent person...'

The defense attorney for Jacob Chansley, better known as the “QAnon Shaman,” has released a video that purports to show his client thwarting a muffin theft during the January 6 riot at the Capitol.

Attorney Albert Watkins, who filed a motion on Wednesday in an effort to get his 33-year-old client released from custody pending trial, cited the video as proof of Chansley’s peaceful nature.

“It demonstrates and reinforces my client’s long-standing status as a peaceful, non-violent person who sought to thwart a theft and support the need for those in the Capitol to be respectful of law enforcement,’ Watkins told the Daily Mail.

Chansley, who became a household figure due to his fur clothing and horned headgear, is currently being held in federal custody in Washington, D.C. following his January arrest in Arizona.

As his nickname suggests, Chansley, who is facing six charges and up to 28 years in prison, is a prominent promoter of the QAnon conspiracy theory.

Aside from the video, Watkins also presented in his motion an essay written by Chansley in high school in which he expressed his desire to be a “God.”

Chansley explained in the 2005 essay his intentions to become a “spiritual master” similar to “a Christ, a Buddha, or a Muhammad, whichever you prefer to call it.”

Watkins claims that the essay likewise proves “the long-standing loving and caring nature of the Defendant for all, even those who hate him.”

The motion, which was widely mocked online, is just the latest attempt from Watkins to paint his client as a misunderstood victim whose “vulnerable” mind was distorted by former President Donald Trump.

Watkins found himself in hot water earlier this month as well after attributing the actions of Chansley as well as other rioters to developmental disabilities.

“A lot of these defendants… they’re all fucking short-bus people,” Watkins said. “These are people with brain damage, they’re fucking r*****ed, they’re on the goddamn spectrum.”