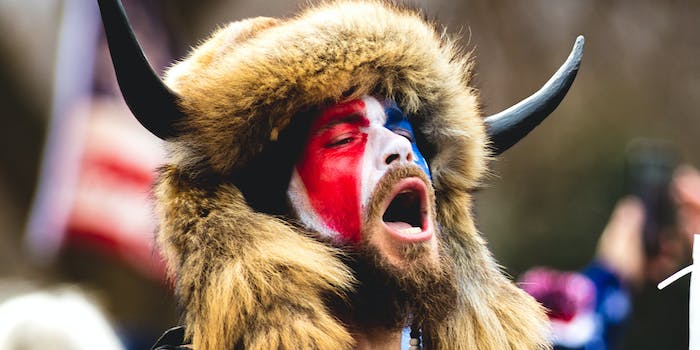 Albert Watkins' excuse for the insurrection attempt was resoundingly rejected.

The attorney for the “QAnon Shaman” claims that people participated in the deadly Capitol riot because they have intellectual and developmental disabilities.

In an interview with Talking Points Memo, Albert Watkins used several deeply offensive slurs as he blamed his client’s and others’ alleged actions that day on autism spectrum disorder (ASD) and below average intelligence.

“A lot of these defendants … they’re all fucking short-bus people,” Watkins reportedly said.

“These are people with brain damage, they’re fucking r*****ed, they’re on the goddamn spectrum.”

People were universally appalled by Watkins’ claims that disabilities led people to try to overturn the election in favor of former President Donald Trump. Perhaps none more so than those in the autistic community.

“I will be GODDAMNED if I see another white man blame BEING ON THE SPECTRUM and use it as an excuse for LITERAL CRIMINAL ACTS,” tweeted Meredith Silverman, who describes herself as autistic in her Twitter bio.

“Being autistic is NOT an excuse for what the so-called QAnon Shaman did. Being a f*cking criminal that participated in an insurrection IS,” she added.

Salon writer Matthew Rosza, who is also autistic, called it a “bizarre, bigoted and ignorant defense theory” and accused Watkins of “[stigmatizing] autistic people so your client can get away with a serious crime.”

Watkins, who also represented the St. Louis couple who pointed guns at Black Lives Matter protesters last year, went on to blame “four-plus years of goddamn propaganda the likes of which the world has not seen since fucking Hitler.”

Others accused of crimes associated with the failed insurrection attempt have similarly blamed propaganda for their actions. One defendant has claimed he was sick with what some have pejoratively deemed “Foxitis,” which he apparently contracted from watching endless hours of Fox News.

Angeli is thus far the only defendant to claim he shouldn’t be convicted because he has ASD, however.

However crude and offensive the QAnon Shaman attorney’s language is, the claim isn’t without precedent. He’s essentially attempting to invoke the diminished capacity defense to argue that Angeli shouldn’t be held fully liable for his actions.

People aren’t buying it. One co-defendant reportedly filed a motion to sever their case from another of Watkins’ clients, claiming the remarks jeopardized his ability to receive “a fair trial by an impartial jury.”

More than 400 people have been charged with their alleged participation in the Capitol riot.

According to the Centers for Disease Control and Prevention, an estimated 5.4 million people in the United States have ASD.