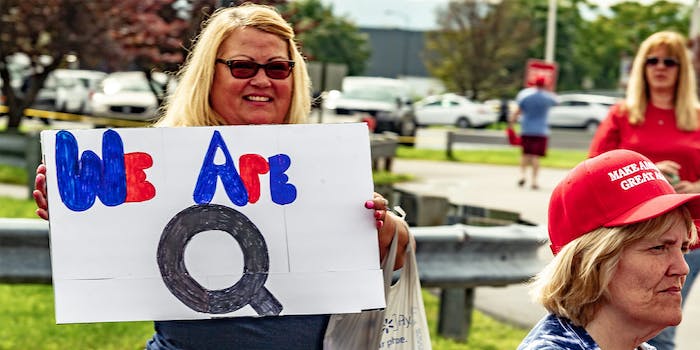 How the QAnon movement continues without its messenger

This makes for one of the longest QAnon stretches without reaching out.

It’s now been exactly a month since QAnon, the anonymous conspiracy theory avatar, gave a snippet of intel to their followers, with the last drop coming on May 26.

That post was a repost of a drop from March castigating the “FAKE NEWS media” for attacking the QAnon movement—a well-trope among believers of the theory that Q is a Trump administration insider revealing secret intelligence about the inner workings of the government, using the message board 8chan for their screeds.

While they’ve taken breaks of a few weeks before, this is the longest the QAnon persona has gone without posting since they first claimed in Oct. 2017 that Hillary Clinton would be arrested as part of a spasm of violence and upheaval.

Indeed, since a flurry of posts in late March, Q has only made about 50 posts—a far cry from the time when “Q Clearance Patriot,” as they were first known, would make hundreds of posts in just a few days.

Does Q’s silence mean the movement that grew out of the arcane information riddles has petered out as well?

Are QAnon believers walking away, renouncing the time they spent researching and the money they spent on Q merchandise? Or have we gotten to the point where even QAnon’s future contributions are less important than what the poster has already provided?

What is the state of the QAnon movement now that Q seems to have fallen silent for good? To find out, I reached out to the movement itself, asking a series of simple questions to both high-profile gurus with six-figure followings and rank-and-file Q readers.

I'm writing a story about the one month gap since QAnon's last post, and want to ask the most fervent believers some simple questions:
1. Do you still believe in Q and "the plan" despite the silence?
2. If so, why?
3. If not, why not?
4. Will you leave if Q never posts again?

What followed was a deluge of responses, not so much from the major QAnon-decoding Twitter accounts (most of whom didn’t respond to my request for comment), but from ordinary believers, the throng of YouTube-watching, Q-swag buying, conservative-following Twitter accounts with three stars for General Michael Flynn in their profile names and Oakley sunglasses in their avatars.

Some of their responses were fairly thoughtful and well-spoken arguments. Others were Pepe the Frog memes. But what they all revealed was the same thing: a movement that shows no signs of slowing down, giving up, or turning back.

They still believe that QAnon is or was a person connected to the Trump administration, and they still believe that that person used both open-source documents and unique pictures and codes to reveal horrific truths about the Democratic Party and the Clintons—even if the overall narrative isn’t quite the same as when this whole thing started.

Here are the biggest takeaways from my conversations with members of the QAnon movement:

They are still 100% on board with the Q movement

I didn’t exchange messages with a single person whose affiliation with the QAnon movement has wavered because of Q’s silence. They do indeed still trust “the plan,” even if the nature of the plan has changed somewhat.

“The value of Q content remains unchanged regardless of the frequency or absence of its posts,” conspiracy theory writer and “truth siren” Zach Haller told me over Twitter.

“While ‘the plan’ can mean the implementation of the Trump administration’s goals and vision for America and the world, it can also mean we, ‘the people’ who are responsible for taking action in our daily lives to address corruption in politics and media and demand accountability from elected officials,” he said, before calling my questions “poorly worded,” “lazy,” “foolish,” and “uninformed.”

.@rothschildmd asks, “Whether or not the lack of posting has dimmed your enthusiasm or trust in Q. Why not? And if Q never posts again, how will you feel?”

No. What Q has done is taught us the comms between Q/@POTUS. We all need to look at tweets/compare to #QPosts. Example. pic.twitter.com/lvyjOGsOdB

Tweeting to his followers, “Yes we all miss #QAnon but we have it all,” he said his enthusiasm for QAnon hasn’t dimmed at all because: “What Q has done is taught us the comms between Q/@POTUS. We all need to look at tweets/compare to #QPosts.”

QAnon followers with far smaller social media imprints expressed the same sentiment to me, or in replies to other believers.

“Q has taught me HOW to think for myself. If Q is not posting trust that it is part of the plan,” tweeted Q follower Diana Carson.

QAnon has seemingly morphed from a highly-placed military intelligence source to the vanguard of a citizen research movement. References to “the storm” are less and less frequent, and while a few major QAnon accounts continue to push the idea of mass arrests and/or executions, many believers are merely grateful for the topics that QAnon has introduced them to.

Indeed, a constant theme of responses from QAnon followers is that Q’s posts and the decodings that followed “opened their eyes” and made them aware of what was really going on—even if the mass arrests and upheaval promised in the early Q posts never materialize.

QAnon now stands as less a predictor of future events (which might be good for the movement long term, because those predictions have virtually all failed) than as a light in the darkness, illuminating unknown, but publicly available, connections and stories. Q is no longer feeding secret information, but exposing public information and tying it together.

“The people are the movement. Q was an informantion [sic] piece in a movement that began well before Q,” Twitter user Randi Gerber replied to me. “The movement is toward Freedom of humanity from a worldwide corrupt Satanic control group. That won’t change no matter what Q does.” ProudAmerican66 added to me: “I can see “The Plan” unfolding everyday – Q has given us the initial Red Pill, it’s up to us to research and connect the dots.”

cuz, the past two years were the awakening period. we needed to be aware of what was really going on. AND we are now. Qs timeline has been accurate. info given is accurate. just because you never put the effort in to verify it, doesnt mean others haven't.

This remains a consistent element of QAnon belief, that those who don’t subscribe to the theory do so only because they haven’t worked hard enough at understanding it. And by “doing research,” one will unlock all of its mysteries.

Over and over I was told to simply “do more research,” using the Q drops (and other publicly available material) as a guide—despite the fact that I’ve read every Q drop, and spent more time on QAnon social media than I’d like to admit.

Or as a Twitter account pretending to be Rod Rosenstein put it, “Lol. Your futile attempts to convince your followers that you do research is mildly amusing. You have done zero research on Q or the legitimacy of the open source intel provided,” while Anne Say told me: “Your very comments show your lack of research and abundance of ignorance.”

The accuracy of Q proofs is still unquestioned

Despite no longer seeing Q as a predictor, but as a highlighter, members of the QAnon movement feel compelled to defend the veracity of Q’s existence. Over and over I was presented with Q proofs—the supposed connections between Q posts and real-life events or Trump tweets.

These range from occurrences of Q posting and Trump tweeting nearly at the same time (referred to as a “delta” in the jargon of Q) to wild claims that Q “predicted” John McCain’s death down to the minute.

Most of these were familiar to me, and none have ever proved Q was a real Trump insider. They were merely manipulations of time stamps on screenshots and/or lucky guesses. Yet I was told constantly that despite Q having seemingly vanished, it was “mathematically impossible” for Q not to be connected to Trump in some way, and if Q is part of Trump’s team, then his silence has some sort of purpose that only a select few can know about.

This is the exact same party line Q believers have been using for the last year and a half: that the entirety of the Q proofs is all the evidence needed to demonstrate that Trump and Q are linked—even if no one proof serves as a smoking gun.

The QAnon movement has moved beyond the need for Q

It’s clear that Q’s voluminous output, along with the equally prolific content created by the disciples who have decoded each of those posts, is all the movement needs to keep going.

“We don’t need Q anymore. You’re already losing badly,” conspiracy theory media personality Dustin Nemos tweeted at me. Other believers shared similar sentiments, that even if Q were never to post again, the movement he/she/they created would still be devoted to researching what they brought to light.

IMO Q hasn't posted because something big is happening that can't even be hinted at. I would miss Q and the excitement we get when he does post, but I wouldn't be disappointed.

“I’m good with it ending here…that means we no longer need Q to think for us,” Twitter user Robin Brubakken said. “Trust the plan and enjoy the show…I believe it has only just begun…” A believer going by RUAnonymous added: “No, of course I don’t care if Q never posts again. Proofs are still coming in from previous posts.”

That said, they still would welcome further input from Q, and generally think it will come at some point, but only on Trump or Q’s timetable. As InTheMatrixxx told me, “I think Q will post again. However, if the Q team doesn’t we already have it all, we are all watching a movie. Enjoy the Show!”

So where did QAnon go?

If it doesn’t matter what happens to Q, then it really doesn’t matter where they went. And most believers didn’t even hazard a guess, only saying that if QAnon has gone quiet, it’s for a good reason. But there are a few theories for why Q has gone silent.

One is that the recent FBI search warrant of 8chan, for information regarding posts responding to a thread linked to a shooting at a mosque in California, has forced Q to go quiet and stop posting on the message board, lest their secrets or identity be revealed.

Q went silent before the warrant was served, but the timing matches up enough that it’s a plausible theory. Another is that recently arrested tech journalist Peter Bright might have been one of the sources of Q’s posts, given his background, frequent disparaging references to QAnon and Pizzagate, and the timing of the arrest. But Bright was arrested on May 22, and Q stopped posting on the 26th. It’s conceivable Bright had the posts pre-programmed, but this seems like a stretch.

Ultimately, these are just theories. It’s just as likely that QAnon is simply an internet hoaxer who got tired of the niche fame they’d found. Or there could be another reason they’ve gone quiet.

Until then, the movement left in their wake will continue to trust the plan, research the drops, and keep the faith. Or as QAnon follower Stacy Jo said simply “I don’t believe ‘in’ Q…I believe Q.”