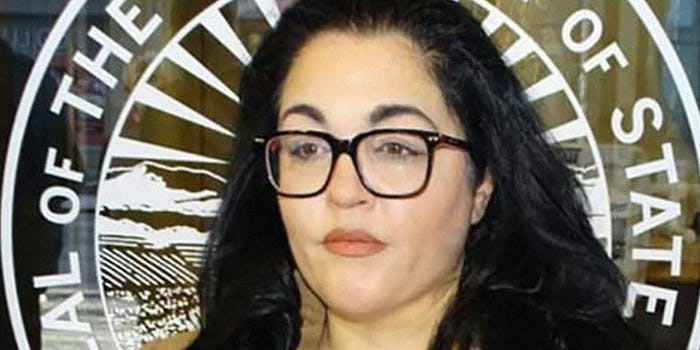 Now she wants to run elections in one of the nation’s largest swing states. Maras, a Republican, is running for Secretary of State in Ohio on a platform that appears to solely comprise election integrity and corporate transparency.

There’s one thing holding her back, however. She’s not on the ballot.

Maras was disqualified from the ballot for paperwork errors and not submitting enough valid signatures of registered voters, the Toledo Blade reported on February 17. The next day, Maras wrote on Telegram that she’d appealed the decision. Her appeal is still pending.

Maras hasn’t let a little thing like getting disqualified from the ballot stop her from running a campaign, however. She’s continued posting on her social media accounts about what she plans to do if elected and running her campaign’s Facebook page as if she’s on the ballot for Ohio Secretary of State.

Continuing a campaign after you’d been disqualified might seem emblematic of the exact kind of activities a person pushing for fair and honest elections would find wrong. But Trump-supporting QAnon believers have never let little qualms like that stop them from fighting hypocritical battles.

It is possible for people to write her in as a candidate. But that’s not how she’s describing her candidacy. On March 16, she posted on Facebook about a campaign event she planned to attend that evening, writing that she’s “running as a Republican on the May 3rd primary ballot for Ohio Secretary of State.”

Her campaign website also appears to still be accepting donations.

Maras didn’t respond to an email asking about the status of her appeal to get on the ballot.

Ohio is seen as a crucial win for presidential candidates, and not merely for its 18 electoral votes. The swing state is famed for its knack for voting for the ultimate victor in presidential elections—2020 was the first time since the 1960s that it voted for the losing candidate.

The Secretary of State is the chief elections officer in Ohio. The Secretary of State has broad authority to investigate fraud and make decisions associated with administering elections. If elected, Maras could attempt to use its authority to claim widespread fraud, alter election records, and even invalidate election results, which is a hallmark of the QAnon movement and a major goal of far-right Republicans.

Continuing to run a campaign after being disqualified from the ballot wouldn’t be the oddest thing about Maras.

Maras is a QAnon follower who claims to be the “OG time traveler.” She was a little-known MAGA podcaster until the Washington Post revealed that she was Sydney “Kraken” Powell’s secret witness to so-called election fraud in late 2020.

Maras’ (then going by Maras-Lindeman) contribution to the case basically comprised a blog she wrote for Laura Loomer in 2019. The blog claimed that the machines that audit election machines can’t detect vote manipulation, which was among the many unsuccessful claims Trump’s lawyers made in 2020.

Although it makes more sense for them to be allies, Maras also has major beef with the Stop the Steal organizer Ali Alexander. She rails on Alexander incessantly.

Maras is currently suing Alexander and a slew of entities, including media outlets, a member of Congress, and Dominion Voting Systems, in a single defamation suit. In a filing, Dominion claimed that she’s suing it over statements the company made about Powell, sort of like defamation-by-association.

Alexander has blasted Maras for “stolen valor” over reports she misrepresented her military service. He’s also accused her of defrauding Powell and sabotaging Powell, Alex Jones, and Roger Stone.

Maras is no stranger to the court system.

As the Post noted, in 2018 a North Dakota court determined that she’d run a charity in what the state described as part of “a persistent effort . . . to deceive others.” It ordered her to pay back more than $25,000 that was supposed to go to a homeless shelter and to buy wreaths for veterans’ graves but instead was purportedly spent at McDonald’s, WalMart, and QVC. North Dakota also said she used various aliases, a habit she seems to have continued. She also claimed to be a medical doctor with a Ph.D. and an MBA, to have a Purple Heart, and have served for years in the military. The Post reports she served less than a year in the United States Navy decades ago and has a bachelor’s degree.

Maras told the Post she was a victim of identity theft and bureaucracy. She further characterized misinformation about her professional history and education as innocent mixups.

Known online as “Tore Says,” today Maras remains an unabashed QAnon follower even as others have tried to repackage the conspiracy theory that a secret government insider was revealing the dirty deeds of a global cabal of elite cannibals who worship Satan and rape children.

Maras’ campaign Facebook page says she’s running for “Secretary Q State.” Her social media channels are packed with references to pedophiles, the cabal, and other QAnon obsessions and slogans. She pals around with QAnon hero Mike Flynn.

Maras managed to get suspended from Twitch, which recently began to crack down on misinformation, but historically took a more laissez-faire view on QAnon content. She claims not to know why Twitch suspended her and says she’s never violated its policies.

Maras is naturally a big fan of all things Trump. So much so that earlier this month, she suggested to her 60,000 Telegram subscribers that Eric Trump should be the 48th president.

If she actually is a time traveler, she may already know the outcome of that election. But she apparently didn’t see herself getting kicked off the ballot.