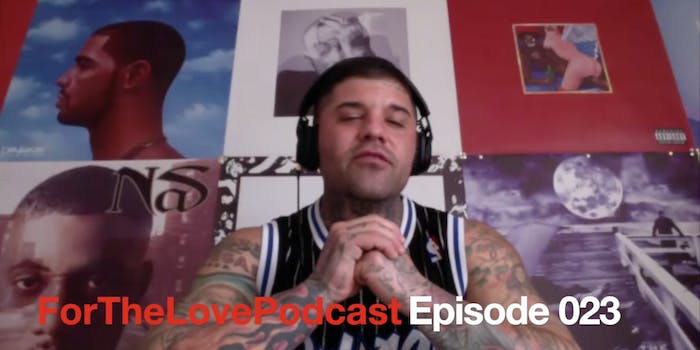 This cop is peddling QAnon, coronavirus conspiracy theories on his podcast

An internal affairs investigation regarding Jason Bandy is reportedly underway.

A police officer in Connecticut is drawing local attention for his podcast in which he touts a number of conspiracy theories related to QAnon and the coronavirus.

QAnon is a far-right fringe conspiracy that alleges left-leaning entertainers and politicians run a pedophile ring and that President Donald Trump is working to take them down. “I’m scared for humanity, bro,” he tells a guest on one episode. “I put a lot of the QAnon and connecting of the dots info just because I want people to open their minds up.”

Under one of his videos, which was reposted to the platform by another user, YouTube offers additional “context” on QAnon. In the video, Bandy questions whether COVID-19 is really “a sickness,” coming to the conclusion that he believes it is rather a “biochemical weapon.” In the same episode, he touts that the elite are drinking children’s blood in exchange for “superhuman effects—fountain of youth effects.”

“These elites are torturing these kids,” Bandy says. “Yes, there’s sex involved. They’re trafficking these children and all these other rituals that they do. They are Satanic worshipers. They are Illuminati. Deep state, all this.”

Bandy also founded V-Rush Vapes, a vape intended to be smoked prior to a workout, according to the New Haven Independent. One Twitter user compared Bandy’s business to The Trial of Heidecker, an Adult Swim mini-series in which Tim Heidecker stood trial for murder after 20 kids died and 158 others were hospitalized from toxic vape poisoning while attending his Electric Sun Desert Music Festival. Bandy’s product “will absolutely kill someone in the next month,” they added.

When asked about the podcast, Police Chief Otoniel Reyes told the New Haven Independent that an internal affairs investigation regarding Bandy is underway.

The New Haven Independent earlier reported that Bandy’s Facebook posts were under investigation. The posts, which allegedly promote right-wing extremism, mirror sentiments made on his podcast.