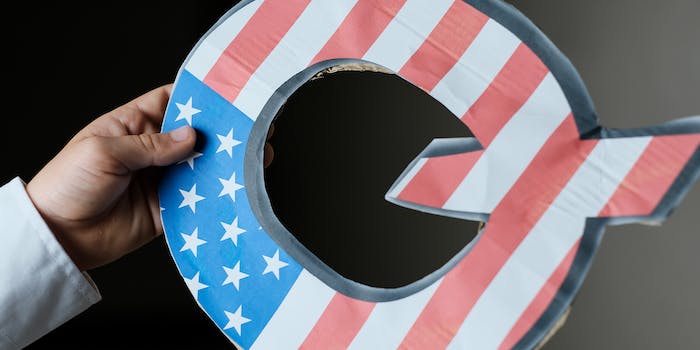 Almost since the beginning of the QAnon conspiracy cult, Q believers have depended on outside sources to gather and help decode Q’s drops. It was only a few months after Q began posting on 4chan that the admins of the first major QAnon subreddit, the long-gone r/CBTS_stream, made a plea for “older generations” who “can’t function on the chans” to join up and help fight the globalist cabal. The need to keep those newly Q-pilled Baby Boomers from seeing the worst, most incomprehensible parts of chan boards led to a small industry of aggregator sites cropping up—safe places where Q believers could get new drops and go directly to the 8chan posts where they were made.

Q drop aggregators, then, play a major role in both disseminating the gospel of Q and driving traffic to the place where Q drops are made. And the biggest of those sites, by a wide margin, was QMap.pub. As a clearinghouse for Q activity, it had a huge user base, often hosting tens of thousands of believers at once, who were doing everything from reading drops to posting on the site’s “Q Prayer Wall.” It was also shouted out in Q drops, with Q sharing a tweet with a picture of a person holding a sign reading “QMAP.PUB.” If anything had the stamp of approval of the mysterious “military intelligence team” that Q fans claim is leaking information on 8kun, it was QMap.

But QMap’s popularity might have been the key to its downfall. Sometime over the summer of 2020, QMap started to get its content delivery service and security from VanwaTech—the same Vancouver company that offered similar services to 8kun. Once that became public, the hunt was on to figure out who was really behind QMap and whether they were linked to 8kun owner Jim Watkins. Within a few weeks, the owner of QMap was outed as Citibank executive Jason Gelinas, running the site out of New Jersey. Gelinas lost his job, QMap went down, and Q fans needed to find somewhere else to get their drops from.

In the wreckage of QMap’s demise, five different major aggregator sites have popped up, all offering essentially the same thing—a collection of Q drops along with links back to their original posts on 8kun. But each is a little different. Some take donations, others proudly announce they don’t. Some can be easily contacted, others have no contact information at all. None of them have truly taken off in the Q community yet. And maybe most importantly so far, have made the crucial mistake Jason Gelinas made—putting easily traceable public information in the about page of an app that he was working on. These are Q acolytes who clearly are devoted to protecting themselves and their sites, and as such, there’s little evidence as to who is running any of them.

The content on QAlerts.app can also be found on inteldrops.com, qalerts.net, and qalerts.pub. But despite its similar name, it’s not to be confused with Jason Gelinas’ still-active Twitter handle, QAppAnon. It does have a similar layout to QMap, though—pages of drops on a black background and a bar on the side offering a variety of “research resources,” different platforms on which to download the QAlerts app, and donation options. One of these was a Patreon page with about 60 patrons, though it was recently removed by the site.

The Daily Dot reached out to the site through its contact page, but received no response from its owner, who goes by “DevAnon.” There’s probably a reason for that, as DevAnon claims on the site: “We do NOT respond or comment to ‘Operation Mockingbird’ [an alleged, though never completely proven, CIA operation to recruit journalists to pump out stories friendly to U.S. interests and hostile to communism] ‘fake news’ media inquiries. See Q post 1688. We only respond and comment to trusted independent media sources as well as select persons within Fox News (Tucker Carlson, Sean Hannity) and white hats within our United States Government.”

One final aspect that QAlerts has in common with QMap? Its domain name system, the way users connect to the website, is routed through VanwaTech—the same company that provided that service for 8kun.

Also not to be confused with the similarly-named (and now defunct) QMap.pub, qanon.pub offers a stark, bare-bones layout, just drops on white background with no extras. The site also owns the domains qanon.app, qdrop.pub, and qntmpkts.keybase.pub; and its only other offering is an extremely long list of Q proofs given as screengrabs, with no analysis or context.

The site also lacks two other aspects of other, larger, Q drop aggregators: contact information of any kind and a Patreon page. In fact, the site makes it clear that it doesn’t accept donations. With its DNS routed through Cloudflare, the site is still fairly under-the-radar, and while there was nobody for Daily Dot to ask for a comment, we did reach out on Twitter to three admins for the Keybase messageboard linked to the site. None responded, and one blocked Daily Dot immediately.

QAgg.news offers a very busy interface, with a search bar, a wide range of other offerings, and drops laid out in an easily searchable format. Like QMap and QAlerts, QAgg migrated over to VanwaTech for its web hosting and security, though so far, there’s no known connection between this particular site and Jim Watkins. This site has taken off at least somewhat, with its visitor count listing over 30,000 visitors in the last 24 hours for Oct. 28-29—not an insignificant amount of traffic.

Beyond its association with VanwaTech, QAgg is also notable for the other value adds it offers to users, including a podcast of Q drops being read by male and female voices that ends at drop 128, and a small but still-active YouTube channel with 1,000 subscribers that features a few videos of the same thing: drops being read out. The site also features a Patreon page for donations, though it only has about 50 patrons.

Interestingly, QAgg is the only aggregator who counts the 4chan post that the first Q drop quotes as “drop 0” and includes it in a block of 128 drops that make up a puzzle to solve. “I and many others believe that the current drop 128 indicates that the first batch of drops equates to an encrypted puzzle (When does a map become a guide?),” the site’s FAQ writes. “Well, typically encryption works in 128 bit/byte blocks. So it’s only natural and fitting that 0-127 would make up those 128, leaving the current drop 128 (which is really the 129th drop) as the “key” somehow (You have the keystone?). We just need to crack it.  News unlocks.”

Seeking more information about what that “key” might unlock, Daily Dot contacted the site’s owner through its contact page, and didn’t receive a response.

QPosts offers only a simple black layout with drops searchable through keyword, number, or date. It also has no contact information or donation site, and no other research to help provide context.

This is a drop aggregator on “The 8chan/8kun QResearch Board Search” board, storing tens of thousands of 8chan/8kun posts, many of which can’t be found elsewhere, as they were deleted when 8chan went down. It was created by a German Q believer who goes by “ResignationAnon,” who also runs multiple other sites, including ones devoted to tracking resignations and notable deaths.

Beyond the treasure trove of old posts, its offerings are much the same as QAgg, including resignations, indictments, arrests, and deaths—all of which are just long lists with little context or attempts to fit into a larger narrative. Daily Dot contacted “ResignationAnon” over email, and did not receive a response although the board owner did post the email publicly and a German publication at least partially identified “ResignationAnon” as “a programer from Berlin.”

Ultimately, as long as Q posts on the anarchic and racism-filled board 8kun, Q promoters will need aggregator sites like these to provide alternate ways for Q believers to get the drops. So far, none of these sites have taken off in the Q zeitgeist the way QMap did. But they also have proven harder to track down in the real world, and seem more bent on protecting their identities.