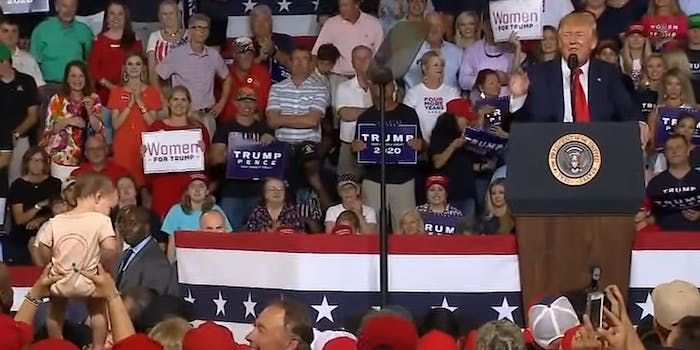 Q baby. Just go with it.

During a political rally wherein President Donald Trump led a chant calling for a Muslim congresswoman to be deported, the president took time out to say hello to a baby.

But not just any baby, a baby wearing a shirt with the letter “Q” on it who was attending his Wednesday evening rally in Greenville, North Carolina.

It may seem innocent, but many people believe that the president of the United States is secretly working to out pedophiles within the Democratic party and the deep state, and the missives about the mission are being posted on 8chan by an anonymous source within the administration known as “QAnon.” It’s a long-running internet conspiracy.

Many people believe this, many of these people attend Trump rallies, and many of them proudly display their QAnon merch for the world to see.

As with any allusion Trump remotely makes to the 17th letter in the alphabet, him calling the baby “beautiful” was seen online as a secret message to backers and believers.

WHAT ARE THE FREKING ODDS ON THIS? #QANON

Q themselves shared news of the child that was (probably not) promised, calling the odds Trump would point to a baby wearing a Q shirt outside the “standard deviation” of the norm.