As the Q Anon conspiracy theory has gained steam, its believers have become increasingly public about spreading the gospel of Q. Now, there’s QAnon merchandise for sale.

All across America, Q Anon “bakers” have been publicly using the name of Q Anon and spurring “normies” on to research the matter further. They have anonymously purchased roadside billboards, rearranged decorative letters in hobby stores, defaced money, written on fruit stickers, and put up all manner of signs.

There’s even a name for it—the QAnon Challenge. 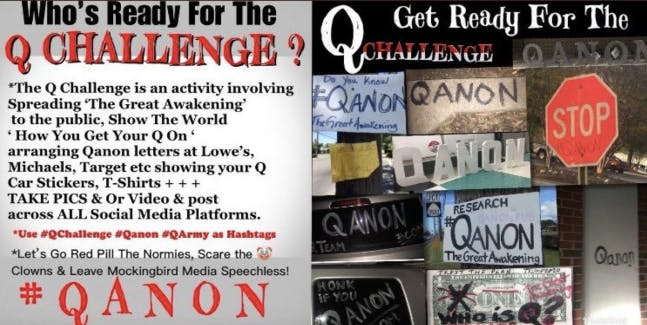 One of the most popular ways Q believers are getting their message out is through QAnon merchandise.

And they’re being sold on some of the biggest clothing sites on the internet. Amazon and Etsy both have a wide range of Q merchandise, as do independent clothing sites TeePublic, RedBubble, and TeeSpring. Most are self-designed, and fairly expensive for a t-shirt, running from $20 to over $40.

It’s hard to know how much of this merchandise actually sells, and how much profit its makers see off it.

But the most popular subreddit devoted to Q, r/greatawakening, is full of pictures of people wearing their Q gear out in public.

Some of the most popular threads on the sub are just that, believers showing off Q swag, both purchased and homemade, and getting deluged by compliments.

We are carrying @OurTroubledTime designed #QAnon “Ask Me About QAnon” shirts for men and women! #WeAreQ who better to ask about QAnon than You? https://t.co/ONJ5LLCvdk #WWG1WGA #MAGA

It’s clear that at least some people are making a profit off Q. But both Q and his/her believers tend to look askance at anyone making money off of the Q phenomenon, particularly if their motives are seen as impure or false.

Several Q posts have attacked the patriotism of those profiting off the movement, with one post declaring that “The only profit we should all be striving for is TRUE FREEDOM.”

Another Q post seemed to reference Jerome Corsi and Alex Jones, well-known personalities in the conspiracy theory movement who jumped on the Q bandwagon and monetized it with YouTube videos and ad revenue.

Or at least they did, until May 11, when they declared it “compromised” and seemed to walk away. The next day, Q put Corsi and Jones on blast without mentioning them by name, declaring that “they attempted to infiltrate, repackage & rebrand as their own. Profit-vehicle. [sic]”

A Reddit thread at the same time attacked those “riding the coattails of the Great Awakening,” with Corsi and Jones mentioned, as well as the maker of a much-derided $0.99 “Q App” for the iPhone.

Other prominent personalities have been singled out for publicizing the movement for profit, not for its message—but have also been defended for getting the word out to more people.

It’s clear that Q believers see the movement as a quest for truth, and that QAnon merchandise exists only to get that truth out to more people. If money is made on selling this merchandise, it should be used to cover expenses only. And most merch makers posting on social media claim that’s what they’re doing.

But since almost everyone involved is anonymous, how does anyone know who is making money off QAnon merchandise? Could it be Q him/herself, monetizing the movement they created?

Would it make a difference? How much of this stuff is even selling?

To get a sense of the motives of Q Anon merchandise creators, Daily Dot reached out to several of the most prolific on Etsy, Redbubble, and other sites. Most didn’t respond to requests for comment, but one merchandiser agreed to an interview over email.

Made some new stickers for my #QAnon loving Patriot brothers & sisters. Vinyl, removable, won't stain. Sticks to glass, bumpers, many other things.

Zack (he requested Daily Dot use only his first name) has a Q Anon sticker shop on a popular online retailer, and agreed to answer a few questions about his association with Q, why he makes Q merchandise, and his feelings about those profiting off the movement.

His answers have been lightly edited for grammar.

How did you first hear about Q?

I first heard about Q through the grapevine of my various news outlets. It was claimed as a conspiracy early on, and I knew I had to investigate knowing how dishonest most of the media can be.

After finding out the 8chan website and the forums supporting it on Reddit, I became enthralled in the intelligence and speculation that was being provided to the public. Most of what I thought to be true has been confirmed by Q.

What is it about Q that you find appealing enough to make QAnon merchandise?

I was compelled to create merchandise for this movement because as a graphic artist I can utilize my talents for real-world applications, so what better way than to make stuff for people!

I was also compelled because of the search for truth. So many people are deceived by what they read and see on the MSM (mainstream media) and think it is the truth. I believe it is my duty to do whatever Q needs to have the truth be seen.

How much QAnon merchandise are you selling, in general?

I am selling a good amount of product even though I have done zero advertising.

The most popular items are any with the slogan WWG1WGA, or “where we go one, we go all!” It is a rallying cry for us Patriots in search of enlightenment. I am working to provide more than just stickers, such as shirts, hoodies, and flags.

In your opinion, who do you think Q is?

Q has told us that only 10 people know the whole picture and that 3 are non-military. I believe that group is Q. I also believe that we the people are Q. It is more than just one person or a group of people. It is a movement of Patriots that love this country more than most realize, and we will stand by those who are trying to shine the light on the darkness.

Q is the battle of good vs evil. Q is the battle to take back our country. Q has been planned for decades and the plan is finally being implemented. Donald Trump is just the messenger for the movement and he was chosen by our military to lead it. Everything he has said is the truth and it will be proven in time.

How do you feel about you and others making money off the Q phenomenon?

Q has explicitly criticized those who utilized this movement to enrich themselves. I am not one of those people. My goal is to get the spread the TRUTH to as many people as possible and expose the evils of the deep state.

Others, as well as myself, know this and we are doing whatever we can do achieve that. Of course, there are costs involved and the profits are to cover my expenditures.

Q is referring to those who utilize their platforms to increase their following and to convince that their products are beneficial to the movement, i.e. Jerome Corsi. A relatively unknown figure with less than 1,000 subscribers on YouTube, [Corsi] decided to jump on the Q phenomenon.

After seeing his subscribers jump to higher than 30k he then decided to push a book he wrote [2018’s “Killing the Deep State”] which he claimed was directly related to Q’s actions.

Q did not like this and called him out for all of us to see on 8chan. Once the word was out on Corsi, InforWars, and others, our movement became strengthened 10x over because it awakened us to deceptions within our own movement.

Since Daily Dot spoke to Zack, Apple pulled the controversial QAnon app from its online store, ostensibly for violating corporate policies. But Amazon and smaller retailers continue to sell countless variations of merchandise related to Q and the movement’s —all the while, Q hasn’t posted a new drop since July 4.

It seems that not even silence can stop QAnon merchandise from flying off the shelves.