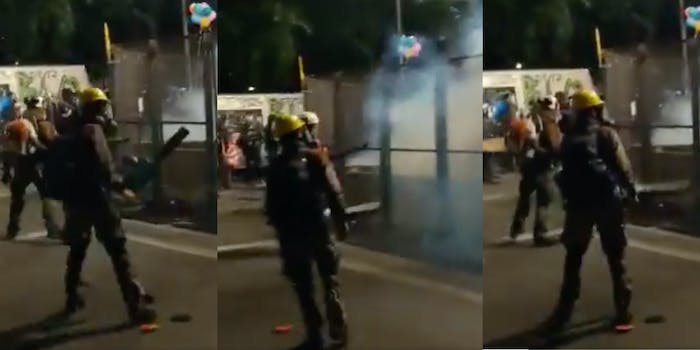 Protesters in Portland appeared to successfully blow back tear gas at federal officers on Friday night.

Black Lives Matter protesters gathered outside the city’s federal courthouse. Protesters were joined by military veterans, grandparents, the wall of moms, and the wall of dads. The Associated Press reports that after protesters shot multiple fireworks toward the building, federal officers deployed tear gas to disperse the crowd.

In response, some protesters used leaf blowers as a tear gas-deterrent.

Mike Baker, a New York Times correspondent who reported on the protest from the ground, posted a video of the leaf-blowing protesters in a thread. “Protesters appear to be winning this battle with the feds, who have launched an immense amount of tear gas,” Baker tweeted.

In a follow-up, Baker posted a photo of a federal officer holding a leaf blower of his own. “After getting much of their own tear gas blown back at them last night, it looks like the feds went to the hardware store and got leaf blowers of their own,” Baker wrote.

It’s unclear if the protesters using leaf blowers on Friday night were from a specific group, but the tactic has been increasingly used by dads in Portland. On July 21, a memo was sent out urging the group, known as “PDX Dad Pod,” to assemble with leaf blowers at a protest that night.

The helmeted, orange-wearing dads heeded the call. They were subsequently spotted with leaf blowers in hand at the protest. “FATHERS AGAINST FASCISM,” one of their signs read.