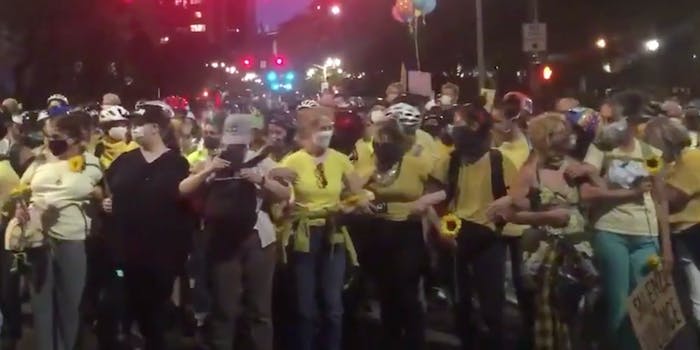 This ‘Wall of Moms’ is serious about protecting protesters

Federal agents used tear gas on the moms, but they keep returning.

A group of protesters calling themselves the Wall of Moms placed themselves between the federal agents and the rest of the protesters in Portland, Oregon this past weekend.

Organized by 35-year-old Bev Barnum, Wall of Moms draws on the traditional strategies of weaponized respectability and placing those the state is most reluctant to hurt between it and those most at risk. Similar to the calls for “white allies to the front” seen at other Black Lives Matter marches, the Moms were hoping to make use of the cultural veneration of—especially white—motherhood, and the instinctive reluctance to harm women who are perceived as embodying it. Barnum, who is Mexican American, told BuzzFeed News that she wanted to use the privilege of being “white appearing” to protect other protesters who were more likely to be targeted by law enforcement, and for other women to join her by doing the same.

Though the group and the rest of the crowd were eventually subjected to tear gas, flashbangs, and other less lethal measures to force them to disperse, Barnum believes the agents showed restraint compared to previous nights, and that this is at least partly due to the moms’ presence. “We could tell by their body language,” she said. “There were two federal officers in front of us that seemed to say, ‘We don’t want to shoot y’all.'”

The moms also showed up on Saturday night, dressed in yellow and carrying sunflowers, chanting “no justice, no peace.”

Some have celebrated the moms’ involvement, citing their apparent inhibiting effect on the federal agents, the increased media attention, and the terrible optics of tear gassing a bunch of moms.

However, others are less happy, accusing the moms of centring themselves or centring whiteness. Barnum and Wall of Moms has responded to this criticism by reaching out to various Black-led activist groups for direction, and looking for ways to support Black mothers in the meantime.