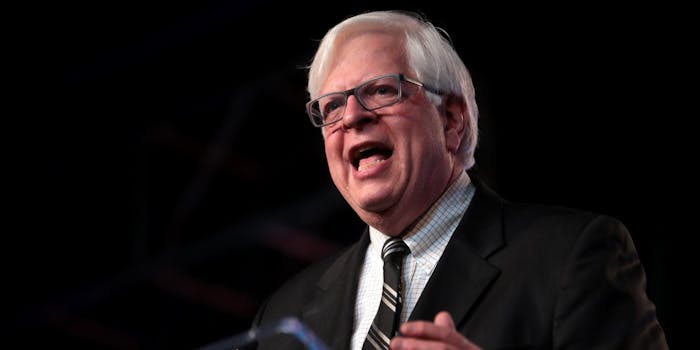 'When I talked to the principal and vice principal, they acted like this was just another assignment.'

A public school in Ohio has stirred controversy after a teacher began giving students extra credit for watching videos from the right-wing website PragerU.

As reported by HuffPost, students in a 10th-grade history class at Maumee High School were assigned a series of questions after watching videos such as “Build the Wall” and “Why the Right Was Right.”

Videos from PragerU—which is short for Prager University, although PragerU is not an accredited university—often feature prominent conservatives such as Candace Owens, Ben Shapiro, and Charlie Kirk.

Concerns over the videos being used by the school were raised by Andrea Cutway, whose 16-year-old daughter Avery Lewis stumbled upon the lesson while hoping to earn some extra credit.

In an email to the school’s principal, Cutway argued that the content was “ALT RIGHT propaganda.”

“If you Google PragerU and spend a few minutes scrolling, you will see that this site is controversial at best,” Cutway wrote.

One video in particular, titled “How to Steal an Election: Mail-In Ballots,” clearly insinuates that mail-in voting will ultimately lead to President Donald Trump having the election stolen from him. The videos by the site are unabashedly far-right and are frequently filled with misinformation.

Cutway, who says her main concern was for other students who may not be aware of PragerU’s history, immediately pulled her daughter from the history class.

Lewis eventually met with school administrators to voice her concerns. The school offered a compromise: The teacher behind the lessons would also show left-leaning material to students as well.

But Cutway argues that PragerU videos should not be assigned at all.

“When I talked to the principal and vice principal, they acted like this was just another assignment,” Cutway stated. “I said, ‘I think at this time we need to end this call, gentlemen.’ … I don’t know what you have allowed to bring into your public school.”

The school, however, appeared to agree with Cutway in the end, opting to remove the PragerU videos from the teacher’s syllabus.

In a statement to HuffPost, Todd Cramer, the superintendent of Maumee City Schools, said he welcomed such debate among the community.

“We believe that students deserve a balanced presentation of content,” Cramer said. “We support our educators in using a variety of instructional tools and materials. We expect our educators to exercise good judgment and trust our students, parents and community to engage our staff in conversations about our instructional methods and the materials being used if they feel the need to do so.”

While such videos are no longer being used in Maumee, PragerU recently launched its PragerU Educators and Parents program, also known as PREP. Craig Strazzeri, PragerU’s chief marketing officer, says more than “2,000 parents and educators have already signed up for PREP” in order to have PragerU’s materials taught to students.

This story has been edited for clarity.