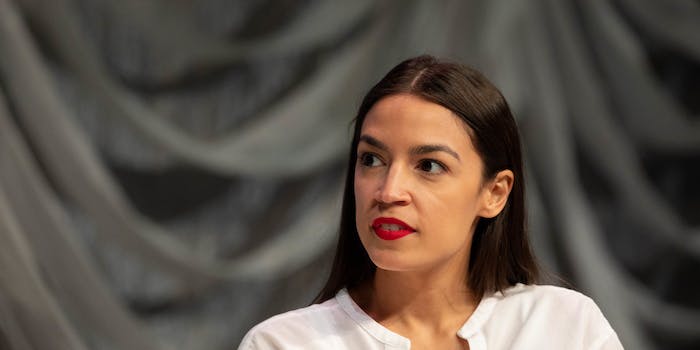 Congresswoman's office says they did not initiate the inquiry.

Podcaster Ryan Wentz, who goes by @queeralamode on Twitter, tweeted that plainclothes officers showed up at his door after he called Ocasio-Cortez’s remarks on Israel and Palestine “incredibly underwhelming.”

According to Capitol Police, he actually came on their radar for being tagged in someone else’s tweet that was deemed threatening, Fox News reports. That tweet has since reportedly been deleted. It’s not clear what the content was.

“Obviously as you can imagine, anytime there’s anything that could be a perceived threat, we’re going to talk to everybody involved, whether they’re directly involved or indirectly involved,” a Capitol Police official told Fox.

The New York Post reports that Wentz claims officers accused him of threatening to kill Ocasio-Cortez.

Wentz tweeted that he was “shaken up” by the encounter with California Highway Patrol officers and described the accusation of him threatening the congresswoman as “provably false.”

Wentz, who cohosts Soapbox and Left Bitches, which Twitter identifies as Russia state-affiliated media, has called on Ocasio-Cortez to look into the incident.

“I felt scared, intimidated, and violated. They knew my name and where I live,” he tweeted. “It was done on behalf of a congresswoman who advocates against police state tactics.”

The congresswoman’s office told the Post that they did not initiate the inquiry into Wentz, and had “asked the Capitol Police to explain what happened.”

The Capitol Police confirmed to Fox News that Ocasio-Cortez did not report any tweets, and said that the investigation came about as a result of law enforcement’s social media monitoring.

“USCP investigates all threats that are reported by Congressional offices. The Department also monitors open and classified sources to identify and investigate threats,” the Capitol Police told Fox News.

“This is standard operating procedure for the Department. As it pertains to this incident, the Congresswomen did not request that USCP initiate an investigation.”

On Friday, Tucker Carlson did a lengthy segment about the incident. In it, he accused Ocasio-Cortez of feeling “deeply sorry” for herself, “aggrieved,” and conflating disagreements with her with actual threats. Carlson claimed she was behind the police visiting Wentz. Both her office and police had already denied this.

Wentz subsequently tweeted that he now wants Ocasio-Cortez “to publicly condemn the draconian security measures that were carried out in her name.”