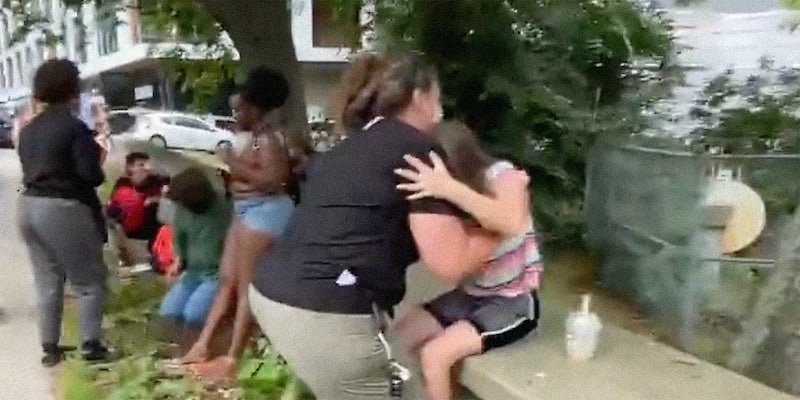 'Anyone arguing that a child being pepper sprayed by cops is the parents' fault is absolutely beyond.'

A viral video on Twitter shows a child getting pepper-sprayed by police during a protest in Canada.

Zane Woodford, a Canadian journalist, filmed and posted a video of a girl being peppered-sprayed by Halifax Regional Police in Nova Scotia to Twitter. The young girl was reportedly participating in a protest regarding the evolving criminalization of homelessness, the issuing of eviction notices to residents living in tents in Halifax city parks.

The video shows Halifax police spray a child to seemingly expedite the dispersal of protesters, who scatter with police sirens blaring in the background.

According to people who say they were at the scene, the basis of the evictions and subsequent protests remain centered on the people who have nowhere to go. The municipality, they say, hasn’t provided any thought on where these unhoused residents should go.

Woodford wrote, regarding the notices, that “the municipality posted notices on tents and delivered them to residents telling them to remove their tents and belongings from parks.”

“Failure to act in accordance with this Notice is an offence and is liable on summary conviction to a fine not less than one hundred dollars and not exceeding ten thousand dollars under the Municipal Parks By-Law and/or a fine of not more than five hundred dollars under the provisions of the Protection of Property Act R.S.N.S., c. 363, s. 1,” a specific notice read. “Failure to remove any temporary or permanent accommodation from any Municipal Park following this direction from the Halifax Regional Municipality as owner is an offence under the Protection of Property Act for which any person can be arrested by a peace officer and removed from the property.”

The unhoused residents reportedly fear aggressions by Halifax leadership, and local police will be similar to those occurring recently in Toronto.

Woodford reportedly talked to two evicted people, who were simply told to simply “leave the peninsula.”

One passage in Woodford’s reporting notes: “So @MikeSavageHFX & @hfxgov Councillors are doing the opposite of what they promised & using violence to tear away what little shelter & safety people forced onto the street have.”

Halifax Mutual Aid tweeted on Tuesday: “But what comes next? Where do they expect these hundreds of people to go?”

Some residents are appalled by the Halifax police’s actions at the protest, particularly in pepper-spraying a child. “I attended my first protest at 10 & organized one at 11,” Twitter user @anti_shan_ pointed out. “Anyone arguing that a child being pepper-sprayed by cops is the parents’ fault is absolutely beyond. Every Canadian has the right to peacefully protest, regardless of age. The only party endangering folks are the cops.”

The Daily Dot has reached out to Halifax Regional Police.