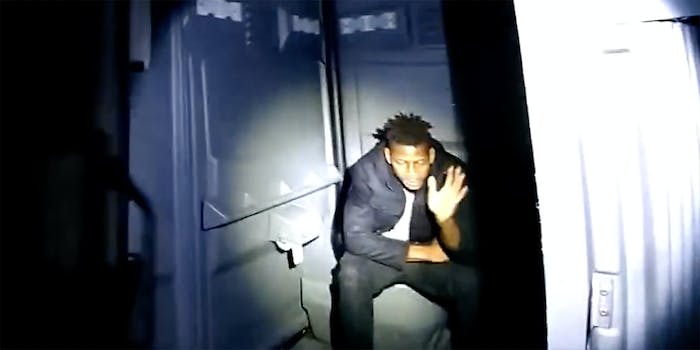 The entire encounter occurred in the span of 2.5 seconds.

Bodycam footage released by the Fontana Police Department in California has revealed an officer shooting a man to death as he was sitting on a portable toilet, according to the San Bernardino Sun.

Daverion Deauntre Kinard, who was reportedly unarmed, was shot to death on February 13 by Fontana police responding to reports of a burglary. When officers approached the scene, they saw Kinard, 28, inside the property. The incident took place the day before Kinard’s birthday.

Kinard then fled into a construction area and was found in a portable bathroom, where an officer, identified as Johnny Tutiavake, fatally shot him, the San Bernardino Sun reported. In a video statement reviewing the footage, police chief Billy Green claimed that Kinard had a “metallic object” in his hand, although it’s hard to make out what exactly he’s holding in the video. The statement also revealed that the entire encounter, from the time Tutiavake opened the bathroom door to when he shot Kinard, took approximately 2.5 seconds. The family has requested that the video be kept private.

“Officers immediately rendered aid to Kinard until medical aid arrived. Unfortunately, Kinard was later pronounced deceased at the scene,” police have said in a news release since. “No weapon was recovered from the scene.”

Kinard’s parents, Kenisha Kinard and Amond Hawkins, filed a lawsuit in March in response to his death. The police department settled with the family earlier this month for $1 million on condition that the parents don’t make any “disparaging” comments on the issue; the settlement requires the same of the police department.

Kinard had a prior conviction of burglary. Officer Tutiavake is still on the force as of early August, when the San Bernardino Sun reported on the issue.

The Daily Dot has reached out to the department and will update the report if they respond.