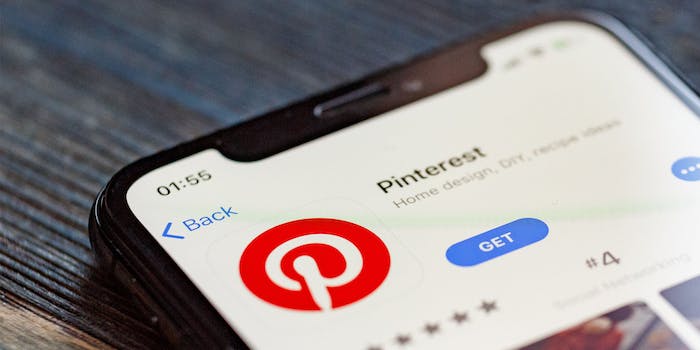 'This is very, very common among all social media.'

A woman is pointing out how she believes pedophiles are using Pinterest for child exploitation purposes, and parents are terrified.

Seara Adair (@riadaaraes), who describes herself as a mother and child sexual assault survivor and advocate, took to TikTok to warn parents about their children’s safety on the internet. Her TikTok warning about Pinterest grooming accounts has now reached nearly 300,000 views and parents are weighing in about keeping their children safe online.

The video points out a Pinterest profile she found where she claims the account’s photo was allegedly a suggestive image of a young girl in a bathing suit and a man’s penis.

She explains the account is full of “stolen images of girls between the age of toddler to preteen, all wearing swimsuits, gymnasts outfit, sleepwear,” along with infographics about young women going through puberty, how to talk to young women about sex, and tampon usage.

One concerning thing that Adair found especially damning are pins on how to specifically photograph children.

“This person is learning how to groom children in order to create exploitation material,” she concludes.

Users were outraged at the prospect of Pinterest grooming and said they are going to extra lengths to protect their kids.

“Gonna go remove all photos of my daughter now … even if only friends can see them,” wrote @vingu721.

“This is why I’ve never once posted my children and never ever ever will. Even on my private accounts w/ followers that I know,” added @mshukoh.

One user said this unfortunately just one part of a larger internet problem.

“I worked as a content moderator for a big company, and this is very very common among all social media,” wrote @user524497.