How Philadelphia mobilized against the far-right

The far-right rally scheduled for this weekend was more of a whimper than a bang.

With many in Pennsylvania still reeling from the aftermath of last month’s deadly synagogue shooting, the top minds of Philadelphia’s right-wing community—straight from the Facebook group “Sports Beer  &  Politics II”—felt it was the perfect time to hold a rally.

“We the people have been silenced for too long. It is far beyond time to make a stand and let our voices be heard,” the group wrote on Facebook. “Too many times our voices are drowned out by the voices on the left. We need to be louder, we need to be stronger. We will let them know that their violent tactics will not keep us down or scare us away! The Silent Majority must make a stand now!!! This is our time!! This is our day.”

It was a rallying cry to right-wing groups across the northeast, who called on supporters to travel to Philadelphia on Saturday.

Billed as a pro-Constitution, pro-ICE, pro-police, pro-life, pro-gun, and anti-illegal immigration rally, the “We The People Rally” tried to attract members of the right from all walks of life. Everyone from militia members to Trump supporters were invited to join.

Similar to last years deadly “Unite the Right” rally in Charlottesville, Virginia., this rally planned to be something that would “Be the beginning,” creating a level of unity among the right like no movement before.

Under that common banner, over 300 people promised to attend. But when the rally finally occurred, only a small fraction of those who had promised to show did. And they were quickly dwarfed by the number of protestors.

With Sports, Beer & Politics members armed with Gadsden flags and counter-protesters with signs displaying the adopted antifa mascot Gritty, the two faced off in Philadelphia. Outnumbered and outmatched, the right-wing demonstrators found their voices were quickly drowned out by the cries from the massive influx of counter-protesters.

Cries of “Fascist Go Home!” and “Proud Boys not welcome,” rung out in unison from hundreds of voices as the large police presence made sure to keep the groups separated.

Tensions were high; counter protesters expecting the worst came armed with medical kits. Some who had been present during the Charlottesville rally seemed genuinely fearful of another terrorist attack.

At the end of the day, only three were injured and only four arrested. Although the gathering managed to avert serious violence, many still wondered how the city could have gotten to such a state.

Sports, Beer & Politics has been described as “the foremost organization for right-wing organizing in Philadelphia.” It was founded by a life insurance agent named Zachary Rehl who has a history of organizing Blue Lives Matter and pro-Trump events where members of far-right groups such as the Proud Boys have been invited as speakers.

The Facebook group has also been heavily criticized for many posts that it shares.

Some of these posts include publishing doxes of local educators and CNN employees, posting memes that praise Hitler Youth and support violence against protestors, along with other generally racist, anti-Semitic, Islamophobic and white supremacist content.

The organizers of the rally have vehemently denied accusations of racism and promised to remove any white supremacist attendees, though past rallies have attracted self-proclaimed neo-Nazis such as Identity Evropa leader Eli Mosley, who described the unity among the attendees during a previous rally in articles he wrote on the Daily Stormer and JewWorldOrder.org.

The Keystone State Skinheads, a group whose members have been charged with hate crimes ranging from random attacks on minorities, to indiscriminately murdering the homeless had pledged to attend the rally. So had the Proud Boys.

After pledging to ban hate groups from attending the rally, locals flocked to the organizer’s Facebook page to question if the Proud Boys would be allowed.

The organizers’ defense of the Proud Boys by only seemed to embolden opposition to the rally; counter-protesters began organizing opposition called the Push Back Campaign, which began monitoring some of the attendees of the rally.

The counter-protestors went so far as to get one man—who was apparently invited as security for the rally—fired from his job at Comcast after publicly revealing him as a member of the Proud Boys.

As more and more news came out about the rally, opposition grew. A local petition received over 1,000 signatures asking that the permit for the rally be pulled and fliers with pictures of far-right leaders who vowed to attend appeared around the city, warning citizens to be on the lookout for them.

Tensions escalated as leaked chat logs revealed that right-wing rally goers were planning to bring any weapons they legally could.

But on the day of the rally, far-right attendees were outnumbered within minutes. Police made quick work with their bicycles to push counter-demonstrators away from the sidewalk and across the street, allegedly injuring a protester in the process.

Only a couple dozen right-wing protesters came out, while the number of counter-demonstrators swelled into the hundreds.

Some at the event included antifa and other local left-wing political groups, while others were made up of ordinary people, such as priests, rabbis, and veterans who came armed with signs promoting peace and civility.

None of the neo-Nazis or Skinheads who vowed to come were spotted in the tiny crowd; most attendees resembled members of the Tea Party rather than the Aryan Brotherhood.

Others who spoke during the rally included a man self-identified as a Delaware small business owner, who runs a conservative Facebook page, and who rallied against taxation. Just as he began to invite counter-demonstrators to send someone to cross the police barricade to debate him, the first skirmish occurred.

At that point, the right-wing demonstrators were instructed to wrap up the rally an hour early.

Despite having three chapters and dozens of members in Pennsylvania, two of the right-wing rally’s security told the Daily Dot that only two members of the Proud Boys actually showed up.

So what scared away the dozens (or perhaps hundreds) of far-right extremists who planned to march in the cradle of American independence, leaving only a few moderate conservatives to attend?

It seems that the people of Philadelphia made it clear that right-wing extremists weren’t welcome in their city. 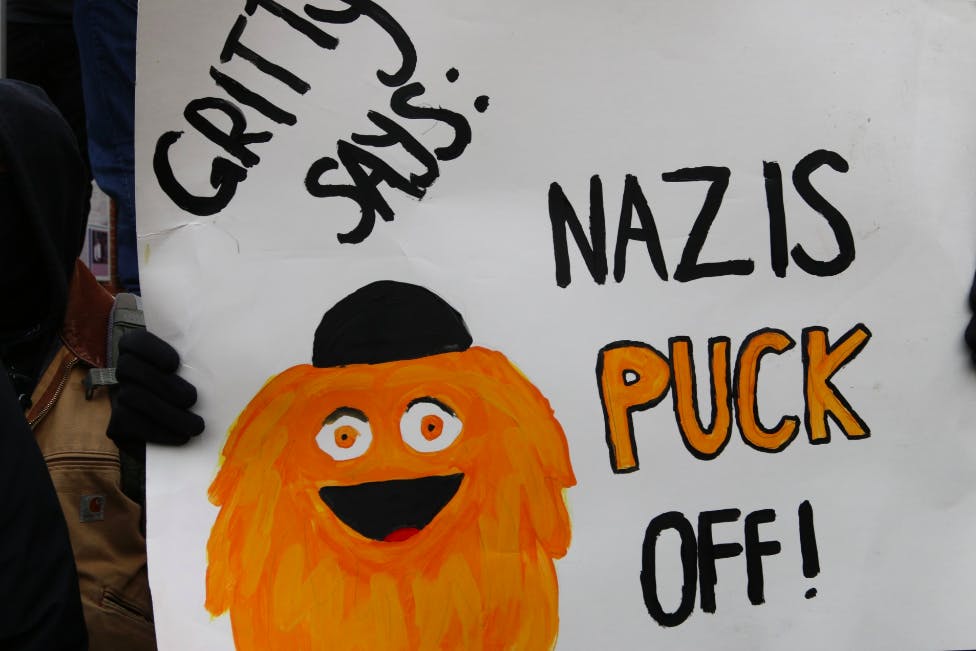