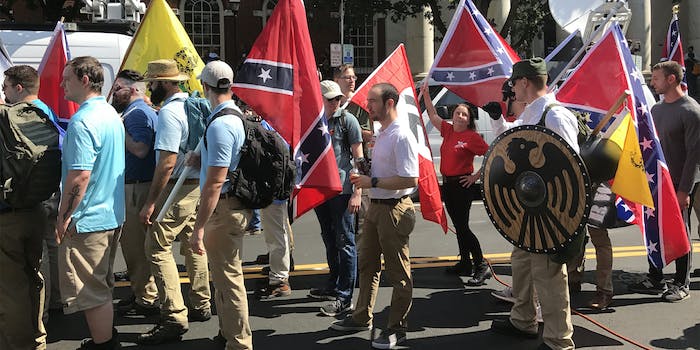 This shouldn't be a surprise.

A neo-Nazi who was convicted of domestic terrorism has since been identified in photos of last year’s Unite the Right rally in Charlottesville.

Taylor Michael Wilson, a 25-year-old Missouri resident, was sentenced to 14 years in federal prison on Friday for forcefully stopping an Amtrak train in rural Nebraska last October. According to witnesses, Wilson broke into the locked engine compartment and pulled the emergency brake to stop the train. Wilson reportedly said he did this to “save the train from Black people.” According to court documents, some passengers who heard Wilson had broken into the engine compartment panicked and tried to climb out the train windows.

Although Wilson did not physically attack anyone, it is not yet known if he was planning to do so. When law enforcement arrested him they found a loaded .38 caliber handgun and a speedloader on his person, as well as his membership card for the neo-Nazi group the National Socialist Movement. In addition, four more loaded speedloaders, more ammunition, a hammer, a knife, and a gas mask were found in his backpack. Character witnesses in the trial told investigators that Wilson had talked in the past about wanting to kill Black people, and may have put up “whites only” signs at businesses.

Since the conviction, people have been combing pictures and videos of the Unite the Right in Charlottesville and other white-supremacist events, and have come up with quite a few photos of Wilson.

I just realized I have video of Taylor Michael Wilson (highlighted in vid) – nazi just sentenced to 14 years for terrorism on an Amtrak – yelling and fighting during the UVA torch rally in #Charlottesville.

When arrested, he had a National Socialist Movement I.D. on him. pic.twitter.com/MQIAgWRldC

What is most shocking to many are the pictures of Wilson standing with James Fields, the man who rammed his car into counter-protesters at the Unite the Right rally in 2017, injuring 19 and killing counterprotester Heather Heyer. It is not yet clear whether they were friends, or if they just happened to be standing near each other.