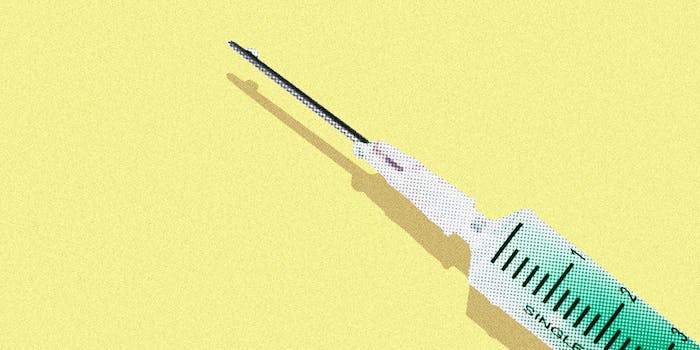 A months-old article is being circulated online by anti-vaxxers.

Conspiracy theorists are claiming that the CEO for pharmaceutical giant Pfizer has not been vaccinated—using it as evidence that the inoculation for COVID-19 is unsafe.

In a tweet on Thursday, Emerald Robinson, a White House correspondent for the conspiratorial outlet Newsmax, shared an article from the Jerusalem Post noting that Pfizer CEO Albert Bourla had not been “fully vaccinated.”

“The CEO of Pfizer had to cancel a planned trip to Israel because he was not fully vaccinated,” Robinson tweeted. “Let me repeat: BECAUSE HE WAS NOT VACCINATED.”

The tweet was quickly shared nearly 12,000 times and received attention from other prominent conspiracy theorists as well.

Dr. Kelli Ward, the chairwoman for the Arizona GOP, seemingly framed the allegation as suspicious.

“This seems… interesting, doesn’t it?” she wrote.

The tweet also made its way to the messaging app Telegram, where major figures in the QAnon movement such as disgraced lawyer Lin Wood amplified the supposed bombshell to hundreds of thousands of people.

But it turns out the allegations are being totally misconstrued by Robinson and her cohorts. Simply clicking on the article reveals that it was written nearly five months ago in early March.

Bourla had already explained in December 2020 that he had not yet received both doses of the vaccine due to the simple fact that his age group was not being prioritized at the time.

The CEO specifically stated that he did not want to “cut in line” and receive both vaccinations before those older than him had been given the opportunity.

Twitter users who bothered to actually read the article were quick to call out Robinson for attempting to pass the outdated article off as new.

“Amazingly, if you go back to early March a lot of people weren’t fully vaccinated yet,” Twitter user @Rschooley said. “Linear time, how does it work?”

Not only that, Bourla had already tweeted about receiving his second dose just three days after the article was published on March 10.

“Excited to receive my 2nd dose of the Pfizer/BioNTech #COVID19 vaccine,” Bourla wrote. “There’s nothing I want more than for my loved ones and people around the world to have the same opportunity. Although the journey is far from over, we are working tirelessly to beat the virus.”

Another Twitter user, @TheRocketRalph, even claimed that Robinson began hiding replies to her tweet that pointed out the article’s publication date. The Newsmax correspondent eventually added a follow-up tweet that vaguely admitting Bourla had received his second dose all the way back in March.

Unsurprisingly, Robinson’s second tweet has only received a few hundred shares. The original tweet has not been removed and continues to be promoted across social media.