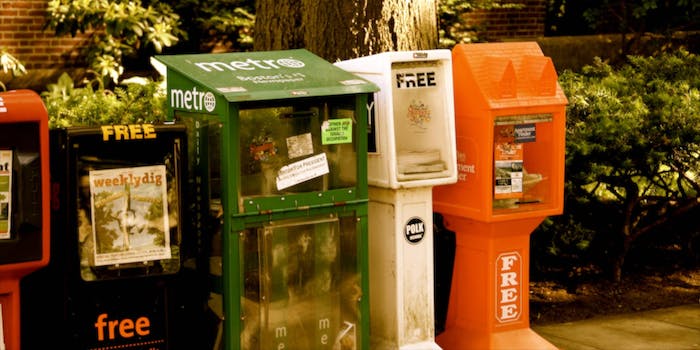 62 percent of Americans get their news from social media, report finds

Feeding from the feeds.

News feeds are the new newsstands; according to a recent survey from Pew Research Center, a majority of American adults get their news from social media.

In conjunction with the John S. and James L. Knight Foundation, Pew found that 62 percent of U.S. adults surveyed use social media to get the news—and 18 percent do so on a regular basis. It marks a considerable jump from 2012, when Pew asked a similar question and found that 49 percent of people saw news on social media.

Pew’s survey took into account the views of more than 4,000 people, gathered between January 12 and February 8—months before the controversy surrounding Facebook’s editorial control over its trending news list was revealed.

The findings suggest that Reddit users are the most news hungry of the social media frequenters, with seven in 10 of its users seeking out news on the platform. Two out of three (66 percent) Facebook users say they get news from the site, while 59 percent of Twitter users get their news 140 characters at a time.

Other sites–including Tumblr, YouTube, Instagram, LinkedIn, Snapchat, and Vine—all serve as news gatherers to a lesser degree. Only Tumblr had more than 30 percent of users receiving news on the platform; the other services served as a news feed to fewer than one in four users.

YouTube was second in reach only to Facebook in the survey with 48 percent of the public using the video-hosting service; however, just 21 percent of its users watch news on YouTube. In terms of spreading news, Pew found that it had about the same effect as Twitter, despite the microblogging platform’s considerably smaller user base.

Pew found that many users who get news from social media use just one site for that purpose. Sixty-four percent of social media news readers were single-source users, while just over a quarter of people used multiple sites. Just one in 10 went to three sources or more.

Since social media sites generally source news from many publications, this is perhaps not unexpected; users can see news from a wide range of sources on a single site. The recent quarrel over Facebook’s supposed suppression of conservative news sources and its decision to “inject” stories it deemed important into its trending algorithm raises the concern that those who use a single social media source for news are subject to any bias that platform may hold.

Many social media news readers also receive news from offline sources; about three in 10 watch the local news and two in 10 tune in to nightly network news programs. In almost all cases, users who get news on social media use traditional means of media—TV, radio, and print—to a lesser extent than the general population.

Interestingly, just because users got their news from certain sites did not mean that they were trying to. Pew found that  YouTube, Facebook, and Instagram news users were more likely to get their news by chance; they use the platforms primarily for other purposes. Users of Reddit, Twitter, and LinkedIn, on the other hand, were more likely to visit those sites specifically for news.

Pew’s findings serve to confirm the growing role social media plays in disseminating news and information. How those sites handle surfacing and vetting news will likely continue to be a major topic of conversation—both internally for the companies and externally for its users.