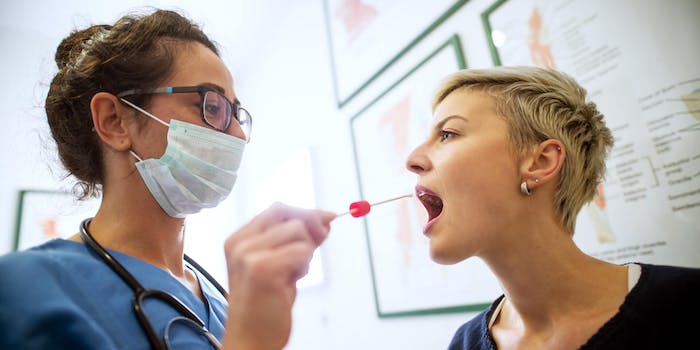 Tweetstorm exposes how hard it is to get tested for coronavirus

As fear of the coronavirus—and the virus itself—continues to spread, Americans are finding their healthcare system severely lacking. Several Twitter threads have recently outlined their alleged struggle to get tested.

Last week, a woman’s Twitter thread went viral after she exposed the extreme challenges in store for many people hoping to get tested. Despite the Seattle woman’s underlying health issues and apparent symptoms, she was told she didn’t “qualify” for testing.

Now, another tale of coronavirus woe is going viral. A New York City woman named Dez Rock shared her story to Twitter on Monday, where it quickly caught the attention of the public.

Rock, the CEO at SIEMonster, began her Tweet thread with some background on her symptoms. “I have a dry cough, sore throat, shortest (sic) of breath, little lethargic and have had a fever,” she wrote. “Yes, I’ve been traveling internationally recently and yes I have underlying lung issues.”

The Centers for Disease Control (CDC) website urges anyone who develops symptoms to get tested. Symptoms to check out for, according to the website, are “fever, cough and shortness of breath.” If symptoms develop and people have recently traveled from an infected area, the site urges visitors to get ahold of their doctor. Despite Rock doing exactly as advised, she says she got nowhere. After calling a New York hotline, Rock went through a series of redirected calls before finally reaching someone.

After relaying her symptoms, Rock was told she didn’t “meet criteria” to get tested for coronavirus. Instead, she was told to find an urgent care clinic. Due to a history of lung issues, Rock complied. She made her way down to the clinic, where she isolated herself while waiting to be seen. The first person to arrive, according to the thread, did a thorough job sterilizing her hands—only to send someone else out, she said.

“She leaves, someone else has to see me, they take my history, ask questions.. apparently, now I’m ready to see a doctor,” Rock wrote. After living in Australia for years, the U.S. healthcare system was a big change for Rock.

When she finally reached her doctor, Rock wrote that he immediately tried to shake her hand. She was aware enough to refuse the gesture and instead exchanged a simple elbow-bump. After taking her history, he found that her heart rate was “around 92bpm,” and she was experiencing slight shortness of breath.

“The doctor asks and I quote ‘have you been to any of the bad countries,'” Rock wrote. “No names are mentioned, I have to assume what he’s saying. I tell him I came through LAX. My lungs are clear as he checks through 2 layers of clothes. I cough as I take each deep breath.”

Through it all, Rock was never offered the chance to be tested for coronavirus. “After the script, I suggest that I should go home and quarantine myself. He says yeah sure as an afterthought,” she wrote. “It’s clear there is no leadership, it’s clear that the numbers are not accurate, and it’s clear there isn’t enough tests to go around.”

In the comment section to Rock’s thread, people shared their own stories of similar situations. “Four weeks ago: urgent care with cough and fatigue. Told it was flu (no test),” Twitter user Erin McPherson wrote. “Three weeks ago: PCP with worse cough. Given Z-pac + cough syrup. Told my lungs were clear. Two weeks ago: Finished Rx. One week ago: first case of Covid-19 in my state. Today: still coughing severely.”

Rock’s is merely the latest in a long string of similar instances. While other countries, including South Korea, Italy, and the U.K. are testing people by the thousands, the U.S. is slow to test even those with clear COVID-19 symptoms. According to a report by the Atlantic, only about 4,300 people nationwide had been tested for the coronavirus as of Monday afternoon.

These issues are all stacking up to create a real sense of fear among Americans. And as Rock pointed out, it appears that there are not nearly enough coronavirus tests to go around.