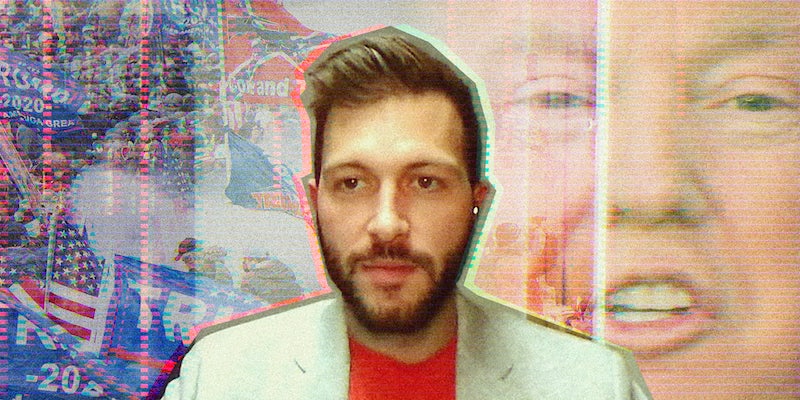 When he's not claiming Trump is still president, he was raising money for Catholic schools.

Since Joe Biden’s victory in the 2020 presidential election, the “Big Lie” that Donald Trump actually won and was denied his victory through a deep state conspiracy has become the driving force behind an industry of gurus and promoters.

But while Trump-world celebrities like Mike Lindell and Sidney Powell have relentlessly pushed the idea that Trump will be “reinstated” as president, another conspiracy theory is catching on with a growing number of Trump diehards. These believers are being told that Biden runs a Potemkin administration and Trump is actually still the president. As the actual holder of the presidency, Trump is still writing executive orders, still sending members of his “administration” to carry out his whims, and possibly even still commanding the military. And at exactly the right moment, Trump will reveal the deception and use “his” military to stride “back” into the office he never left.

In the wake of the Jan. 6 Capitol riot, with the person behind Q silent, a vacuum for beliefs opened up. And one of the most prominent leaders of this new conspiracy movement is “Patel Patriot,” a Trump diehard who is said to be earning five figures a month in donations for fans for pushing a theory that Trump is running a secret military government, one he has laid out through “hidden” emergency documents.

Before he became a leader in the stolen election industry, the figure behind Patel Patriot, Jon Herold, was also a community fixture at home, someone with a leadership role in a local Catholic school.

Herold did not respond to a request for comment from the Daily Dot.

Trump himself is fueling this delusion as much as any anonymous promoter. In many ways, he’s still acting like he’s president, often referring to himself with that title during presidential-style speeches, making statements about sending an “Envoy Ambassador” to other countries, and constantly throwing out “clues” that he’ll be returning to office sometime soon.

Where Trump leads, his fan base follows. Which means Patel Patriot is also growing in stature in a world where delusional fanatics are increasingly agitated and inspired to take action.

When he emerged in July, Patel Patriot claimed he was not a military intelligence insider or researcher, and he had no qualifications or experience in untangling complex conspiracies. He was merely a “devastated” and “confused” Trump fan unable to accept what the “enemy of the people” media was telling him. So he started doing his research, pouring through executive orders, Trump tweets, Wikipedia articles, conservative news sources, transcripts, legal papers, and his own beliefs as to what was in deeply classified continuity of government documents. According to Patel Patriot, as Biden dithered his way through a half-hearted campaign, Trump was prepping for the fact that the deep state would deny him his rightful victory. Due to his secret executive moves, Patel Patriot says, after Biden’s “inauguration,” Trump was still in charge of a military government, still commanding the army and intelligence operatives, and fighting a secret war against enemies both foreign (China) and domestic (antifa). And when the time was right, Biden’s “victory” would be decertified and Trump would reveal the truth to a stunned America.

The theory that grew out of all of this work was called “Devolution,” and from its beginnings as a few posts on Substack, Devolution is now officially a hit among QAnon believers desperate for some sign that their faith will be rewarded. The Daily Dot explored the theory in August, when Patel Patriot had written eight parts of it on Substack and had 33,000 subscribers on Telegram. Since then, it’s only become bigger, more complex, and more popular. Patel Patriot has written over a dozen parts of Devolution, and turned what appeared to be a hobby into a full-time vocation—bringing in as much as five figures a month in income, according to a source close to Patel Patriot who reached out to Daily Dot.

“Conservative politics are becoming more and more decoupled from reality,” said the anonymous researcher known as QOrigins Project, who tracks conspiracy movements on Twitter. “Devolution is dangerous because it’s on the leading edge of that trend—and it demonstrates that a lot of pro-Trump citizens cannot accept the reality of Trump being out of power.”

And many of these citizens have found Patel Patriot. Over the last year, he has gained thousands of paid subscribers on Substack and tripled his Telegram fan base.

Though he has not revealed his name, he has worked tirelessly to become a star in the stolen election orbit, often doing dozens of interviews a week. Patel can frequently be found discussing Devolution on the circuit of podcasts and livestreams cranked out by the upper echelon of QAnon influencers. In October, he spoke in person at the Patriot Double Down conference in Las Vegas alongside luminaries in the GOP and health freedom movements, while doing more in-person interviews there. He’s spoken about Devolution on the livestreams of major names in the QAnon world, like Brian Cates, X22 Report, Jordan Sather, David “Praying Medic” Hayes, QAnon John, and appeared in an interview alongside Paul “Baruch The Scribe” Furber—one of the figures credibly linked to the very first Q posts on 4chan.

His public profile has grown even since then: Devolution was recently endorsed in a Telegram post as “very interesting” by Ron Watkins, the 8chan administrator likely responsible for at least some QAnon content. And in November, Patel Patriot launched a Devolution-themed radio show on the small conservative outlet KRTK, a syndicated outlet of right-wing giants like Dan Bongino and Ben Shapiro. He’s even complained on Telegram of spammers spoofing his identity to sell cryptocurrency to his fans. All of this growing fame is based on the Devolution theory growing publicly, and its creator basking in that newfound popularity.

While Patel has disabled comments on his Telegram channel, which has grown to more than 114,000 followers now, his fans vocally express their agreement with him in other venues. His Substack is full of comments praising his research skills and ability to put together disparate strands of information.

“You’re right on point! I pray everyday that evolution [sic] is real. Thank you again for all you’re doing,” gushes one comment on Part 12, while another on Part 3 praises Patel for “laying this out with the immense research ‘sauce’ to back it up.” Other comments make favorable references to the military reinstalling Trump, hint that lives will need to be “sacrificed,” and speak favorably to the Oklahoma City bombing.

Despite his growing influence in the stolen election community, Patel Patriot himself has maintained his anonymity—even as other figures in the QAnon-stolen election world have been outed. But Daily Dot can reveal the figure behind Devolution as Jon Herold of Bismarck, North Dakota.

He was, until recently, a fundraiser at a Catholic school system in Bismark, “leading the fundraising efforts of a $46 million capital campaign” to build them a new high school, according to his LinkedIn page.

On his LinkedIn, Herold goes by the title “Mission Advancement Officer,” for a school system whose aim is to “offer an enriched, faith-based education which teaches Gospel values across all curriculum.”

A source, someone close to Herold who didn’t wish to be quoted for fear of retaliation, believes that Herold recently quit that job thanks to the revenue he was bringing in from pushing stolen election conspiracy theories—perpetuating a lie that threatens to tear apart the fabric of American democracy. They are also dismayed at Herold’s embrace of “The Big Lie” and the Trump idolatry coming at the possible expense of Christian values, given Herold’s role in his religious community.

Despite hiding behind the veneer of anonymity, Herold was not difficult to identify as Patel Patriot, having taken minimal steps to hide his identity, while showing his face in dozens of interviews and live appearances. The recipient of donations to Patel Patriot made through PayPal (which banned Herold after the Daily Dot inquired about Patel Patriot’s use of the platform) is an entity called Spitballers LLC. That phrase is a common one of the Patel Patriot persona, as in “I’m just spitballing,” or throwing out ideas—which Patel Patriot often claims to be doing as he spins out his unevidenced conspiracy theories.

The incorporation documents for a Spitballers LLC formed in Bismarck in August 2021, just weeks after the first Patel Patriot posts. The principal address for that entity is identical to the address of a house publicly listed as being owned by Jon Herold, the same name independently given Daily Dot by the concerned source, who also confirmed the address. The name also led to the LinkedIn page where Herold had not only listed his employer but used a profile picture that matches up with the same person who has made numerous live appearances.

The Daily Dot reached out to a neighbor of Herold’s, who did not respond but instead alerted Herold to the investigation into Patel Patriot’s identity. On his Devolution “Power Hour” stream on Nov. 6 in the Patel Patriot persona, Herold confirmed the veracity of the email to the neighbor, called this reporter a “douchebag,” and hinted at suing the Daily Dot. In doing so, Herold essentially confirmed that he is Patel Patriot, though not by name, and said that he “knew his name would get out there eventually.”

As the Patel Patriot persona has gathered more followers, the idea that Joe Biden is not legally the president has proliferated in the Republican Party, to the point where polls reveal that as many as two-thirds of GOP voters believe Biden’s victory was illegitimate.

It’s personas like Patel that make this belief so prevalent.

And while Herold continues to claim to have no connection to Q, his theory resonates with Q believers looking for a new leader. Herold’s theories are much more palatable for a mainstream audience and don’t engage in numerology or the belief that dead celebrities are still alive. Just that Trump is still in charge.

QAnon’s similarity to Devolution theory means that it’s been embraced by Q believers who see it as a manifestation of their belief that Trump is a master strategist who effortlessly plays his enemies against each other. While Patel Patriot claims to have no connection to Q and never read the Q drops, both posit Trump as a master strategist concocting a plan that can never be understood by “normies” as a way to destroy his enemies.

“The main recruiting tool QAnon has is hope,” conspiracy theory researcher and podcaster Mike Rains told the Daily Dot. “Devolution is perfect for QAnon because it gives its followers hope for Trump still being the president.”

Beyond catering to Trump diehards holding out hope for the former president’s return, Devolution is nebulous enough that it can continue indefinitely, or at least until the next presidential election.

“It’s also open ended with no set deadline so you can believe in it without having to worry about a deadline passing and nothing happening,” Rains said. In that way, it has the ability to build up more followers, ones who won’t become disenchanted by false predictions.

“Trump isn’t the secret president, but both the Big Lie and devolution prove how deeply his strongest partisans need to see him in power, regardless of the constitution or electoral outcomes,” QOrigins Project said, echoing the complex fiction of devolution that is making Patel Patriot a figure to be watched in a movement desperate for charismatic leadership.

“That same emotional refusal to accept reality is both the origin of the Big Lie and the reason it’s become accepted in the mainstream GOP. It was behind Jan. 6, and its specter looms ahead of us in 2024.”

Thanks, in no small part, to influencers like Herold.