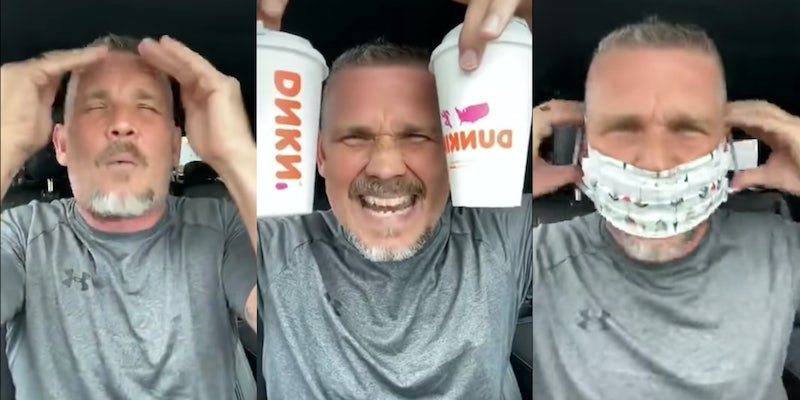 'I’m going to kick your teeth down your throat.'

Greg Locke, an anti-LGBT, Trump-loving pastor, recounted in a now-viral video how he threatened a Dunkin’ Donuts employee after they told him to wear a face mask.

The video, which was posted to Facebook, shows Locke sitting in his car and ranting about the encounter. He says the employee, whom he refers to as “Nazi Skippy,” asked him to wear a face mask should he ever return to the store. “He didn’t have to embarrass me, but he did,” Locke says. “I was doing everything I could, spiritually, not to come over the counter, and still be a pastor in public, because I’m sure there are cameras everywhere because people recognize me all over the place.”

Locke says the employee then accused him of trying to shatter the door’s glass when he “kicked” it on his way out. He alleges he was just pushing the door with his foot to open it.

“I said, ‘If you call me a liar one more time, I’m going to take these work boots and I’m going to kick your teeth down your throat,’” he says in the video.

Locke then said he planned on going back to the store that evening—without a mask.

Following the viral video, Dunkin’ Donuts announced an update to its face mask policy on Friday. The coffee and donut chain is slated to begin requiring on Aug. 5 customers to wear masks. Previously, only employees were required to wear masks.

Locke previously made headlines for refusing to close down his Tennessee church, Global Vision Bible Church, during the pandemic, saying he’d “rather go to jail.” In the video, he’s very vocal in his refusal to wear masks, or what he calls “gags,” and says he discourages his church members from doing so.