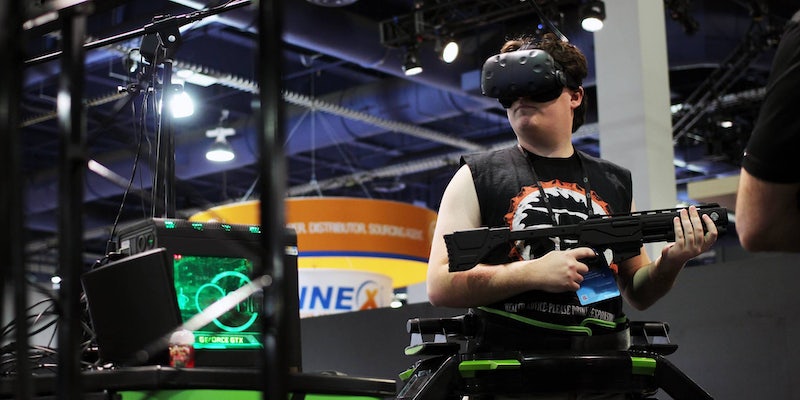 A millionaire Oculus co-founder is funding a group that aims to further flood the internet with memes and other “shitposting” in support of Republican nominee Donald Trump, the Daily Beast reports. But so far, the plan is flopping like an Olympic pole vaulter.

Palmer Luckey, who co-founded the virtual reality company and is credited as inventing the Oculus Rift, has admitted to donating $10,000 to Nimble America’s billboard initiative. As of this writing, just one billboard has appeared depicting Democratic nominee Hillary Clinton‘s face and the words “Too Big to Jail” emblazoned on it in Pittsburgh.

Nimble America is reportedly planning to put up another billboard near the site of the first presidential debate, set to take place at Hofstra University in New York on Monday.

According to the Daily Beast, Luckey also admitted to posting on pro-Trump subreddit r/The_Donald under the username NimbleRichMan. The community wasn’t having it and the post was subsequently taken down, leading honorary r/The_Donald moderator and Breitbart shithead Milo Yiannopolous to address the drama via Reddit and Facebook.

It’s worth noting that Yiannopolous once owned the Kernel, which was bought by the Daily Dot in 2014 amid a swirl of allegations against him from freelance writers. Yiannopolous’s name carries with it its misgivings and biases, but the man currently traumatizing campuses nationwide on his Dangerous Faggot tour wasn’t the one to get the last word.

That honor would go to Luckey.

Luckey denied being involved in the r/The_Donald drama and says he has nothing to do with Nimble America aside from his one-time $10,000 donation.

Though the Daily Beast initially reported that Luckey was listed on the Nimble America website as vice president, that information has since been scrubbed. A search of “Palmer Luckey” on the site leads to an “error establishing a database connection” message.

For one thing, he was "NimbleRichMan" as I described. In emails to me, as I reported, he said he posted with the account made for him

Here is where I sought that clarification from him and what he said. pic.twitter.com/pPfLKUX5Cg

Additionally, I didn't report that he was the founder but that his name was listed as "vice president."

One more email: Luckey clearly states in here that the NimbleRichMan account represents him. pic.twitter.com/RC4mXPFDkM

I would add that there are a lot of archived posts from the account that sure sound like Luckey. https://t.co/Rp0JKVg5en pic.twitter.com/nOvbuaTiB6

In this NimbleRichMan AMA, he says that Milo helped verify his identity. That could only be Luckey, folks. https://t.co/Rp0JKVg5en pic.twitter.com/7NK1iIwJWg

As we reported, Milo was the person who tied Luckey to the other people involved with the project. Seems clear Luckey posted under this name

Luckey’s decision to support an organization which he believes “had fresh ideas on how to communicate with young voters” has already had consequences for Oculus. According to Kotaku, the developers behind Superhypercube have cancelled its Oculus support as have Tomorrow Today Labs and Scruta Games.

It’s not about “politics”, it’s about the face of a company financially backing racist trolls. He is free to vote for whoever he pleases.

SoundStage VR took a different approach to the controversy.

It’s unclear if Luckey’s support of Nimble America will negatively impact his involvement with Oculus, which was purchased by Facebook for $2 billion two years ago.