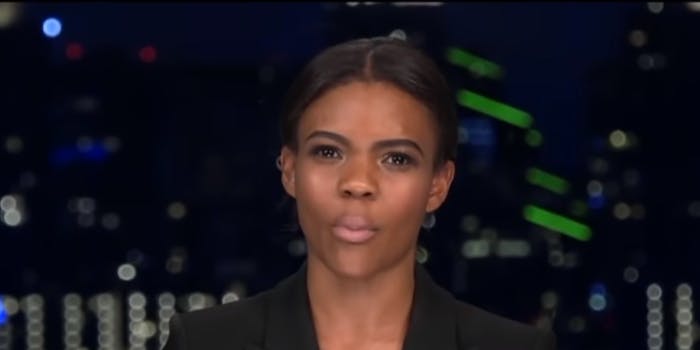 Owens thinks a man in a dress means masculinity is dead.

This month, Harry Styles made history by becoming the first man to independently grace the cover of Vogue Magazine. And he did it in a dress.

Praise for the British singer-songwriter thundered across the internet, both for his singular achievement as the first male cover model for the storied publication and the gender-bending fashion statement.

Naturally, conservative pundit Candace Owens was thoroughly unimpressed. To Owens, Styles’ choice of attire is another signpost on the road to complete de-masculinization of men. She also drew a parallel between Styles’ dress and … Marxism.

Owens retweeted Vogue’s article and griped, “There is no society that can survive without strong men. The East knows this. In the west, the steady feminization of our men at the same time Marxism is being taught to our children is not a coincidence.

“It is an outright attack. Bring back manly men.”

The internet wasn’t having it. Many were quick to note that men (like the Scottish) have been wearing skirts and dresses for centuries, and “masculine” and “feminine” dress has different meanings in different societies. It is also true that Karl Marx was no friend of LGBT rights, as his correspondence with Friedrich Engels attests.

One Twitter user pointed out that Owens takes no issue with women wearing traditional men’s clothing, as she herself “wears a suit 24/7.”

As the dragging intensified, Ben Shapiro swooped in to attempt to rescue the damsel in distress.

Owens responded to criticisms of her by doubling down, a time-tested conservative tactic for milking the spotlight for all it’s worth.

Her multiple tweets had the desired effect of getting more people to pay attention to her—though not in a positive way.

For his part, Harry Styles has simply ignored the haters.