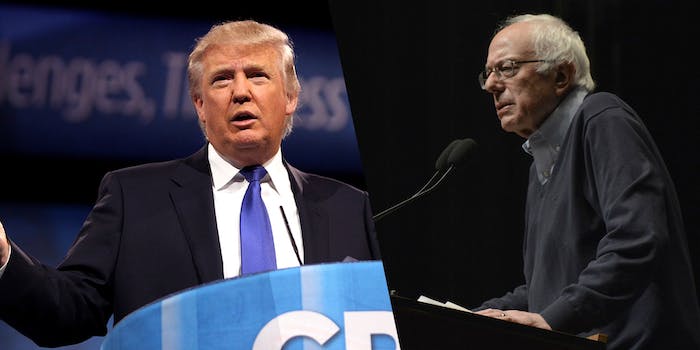 Bernie Sanders took the Oregon Democratic primary over rival Hillary Clinton, extending the party’s national race as Donald Trump wrapped up another win on his way to the Republican nomination.

Lagging far behind Clinton in total delegates, Sanders needed a major win in Oregon, where he was a favorite to take the majority of the state’s 61 delegates.

Prior to the Oregon primary, Clinton had a lead of 283 pledged delegates (1,716 to 1,433) over Sanders. That lead closed slightly thanks to Oregon and a victory earlier on Tuesday in the Kentucky primary.

Thanks to the numbers and demographics, Sanders’s Oregon victory was widely predicted. Oregon’s closed primary, which prevents independents from casting their votes, is a disadvantage to Sanders, who has typically performed well in open-primary states. However, the racial makeup of the state made it favorable terrain for Sanders. The Vermont senator has done well with white males while struggling relative to Clinton outside that lane.

But Sanders’s win wasn’t a foregone conclusion. Two polls this month showed Clinton ahead, which may be a result of the widespread narrative that she is the inevitable Democratic nominee who will face off against Trump in the fall.

Trump also performed well in Oregon, an outcome that was largely expected thanks to a pair of polls that had the businessman and former reality TV star leading by double digits. Trump’s win in the state is largely a formality as he is now running unopposed, though he has not yet reached the 1,237-delegate threshold needed to officially secure the GOP presidential nomination.

The Democratic primary battle continues May 24 in Washington, a state that heavily favors Sanders over Clinton. But to close the delegate gap in time, he’ll have to win big. That trek started Tuesday night in Oregon.