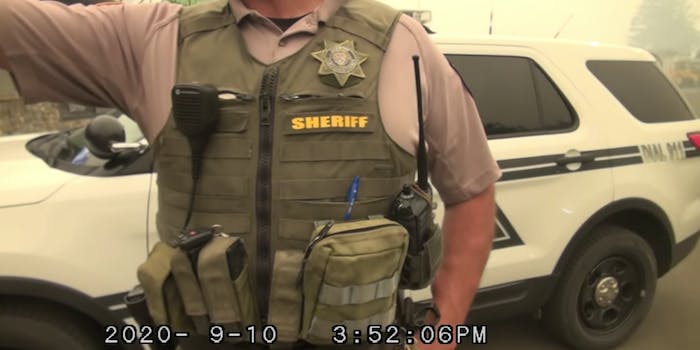 The deputy was caught on video riling up a member of the public with the baseless conspiracy.

A deputy was placed on administrative leave after spreading the false but widespread rumor among the far-right that “antifa” is starting the wildfires in Oregon.

The Clackamas County sheriff’s deputy, whose name has yet to be released, was speaking with a member of the public when he made the claim.

In a video that is circulating on both Twitter and YouTube, the deputy contradicts what officials in the state have been saying for the past few days. Clackamas County Sheriff Craig Roberts said on multiple occasions that there is no evidence antifa is starting the fires, while the FBI’s Portland field office said “the FBI has investigated several such reports and found them to be untrue” in a statement on Friday, per the Portland Tribune. And while a man has been arrested in connection to one fire, he has no ties to antfia, according to the Daily Beast.

In the video, which is dated Sept. 10., a deputy who identifies himself as “Mark,” asks the member of the public what they have heard about antifa, the loose collective of anti-fascist activists.

“What I’m worried about is there are people stashing stuff, right, and it means they’re going to go in preparation,” the deputy says. “I don’t want to sound like some ‘doomsdayer,’ but it’s getting serious. We need the public’s help on this.”

Another nearby deputy chimes in to say that “if they start igniting more fires,” people who refuse to evacuate are “going to die.” He continues to say that they are crossing a “huge line” when it comes to politics, without specifically naming antifa.

Mark then encourages the member of the public to drive around in hopes of finding looters, telling the man to record them. He also asks the man to collect “intel” from other members of the public because of how well-connected he seems. Some residents in Level 3 evacuation zones—meaning it’s “time to go“—are seemingly refusing to leave due to looting rumors. There have only been two theft-related arrests in the fire zones thus far, according to KPTV.

“Antifa motherf*ckers are out causing hell,” the deputy says. “And there are a lot of lives at stake, and there’s a lot of people’s property at stake because these guys have got some vendetta.”

He then tells the man, who recorded the video, to refrain from recording the firefighters, seemingly to protect them against antfia. “I don’t want any antifa—or some other left-wing crazy people …” he says.

Mark says the firefighters have “no dog in this fight,” so they should be kept out of it. Members of the police and antifa have been especially at odds with one another during the Black Lives Matter movement of 2020.

The same deputy, according to the Daily Beast, was caught in a different video telling residents how they can physically defend their property against antfia while staying out of legal trouble.

On Saturday, Roberts addressed the first video and revealed the deputy in question “has been placed on administrative leave.” He said the Professional Standards Unit is now investigating to determine if the deputy violated any policies.

“As soon as I was made aware of this incident, I moved swiftly to place this deputy on leave while we investigate,” Roberts said via a press release, per the Portland Tribune. “The Sheriff’s Office mission is to provide calm and safety especially during unprecedented times such as these. I expect nothing less of our deputies, and apologize to all in our community.”

Roberts confirmed the deputy was “on-duty and in uniform” at the time of the video, calling his statements “inappropriate.”

“Clackamas County is currently in a state of emergency due to several wildfires in our county,” the release reads. “It appears the deputy was aware he made these comments while on video. At the time of the comments, the deputy was tasked with ensuring that residents knew of the wildfire hazards while he was patrolling the area.