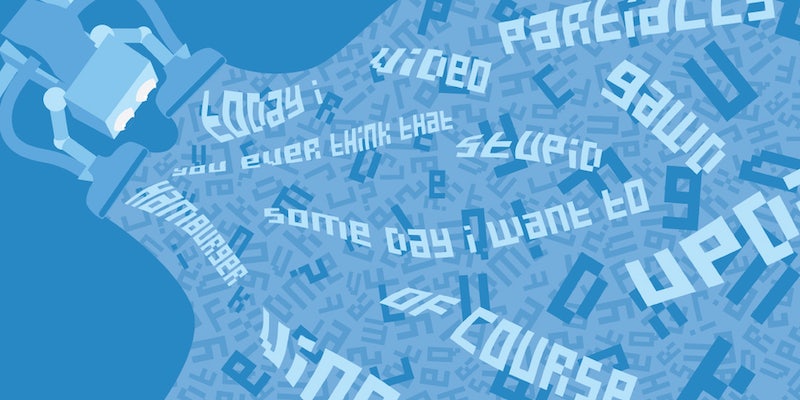 With so much political punditry filling the media sphere, it’s difficult for a prognosticator of inside-the-Beltway happenings to stand out.

Sure, it’s possible and examples abound—Nate Silver changed the way we viewed data analysis and John Oliver turned his late-night comedy show into a weekly exercise in longform investigative reporting—but for the most part, the vast majority of the chattering class fade into an omnipresent background noise.

That’s why, when I was looking for a fresh take on the upcoming midterms and beyond, I made a point to eschew the usual sources. I wanted someone new, someone with something interesting and novel to say. I wanted someone whose insights wouldn’t be tangled up in conventional wisdom or knee-jerk contrarianism.

In short, I wanted Olivia Taters.

Taters isn’t your average political pundit. For one thing, she’s a teenager. For another, she doesn’t exist.

Taters is an automated bot that exists only on Twitter. She’s the creation of programmer Rob Dubbin, who created Taters around Thanksgiving of last year. Since then, she’s amassed about 3,700 followers.

Dubbin has always been fascinated in the way randomness and language mash together in interesting ways, and he initially made Taters as way to scratch that itch. He envisioned a Twitter bot that would produce a constant stream of 140-character pearls of semi-literate absurdism.

“The bot works by manipulating adverb phrases. It started out with adverbs like ‘literally’ and ‘truly.’ It searches the Twitter firehose for people using those adverbs with ‘to be’ verbs,” Dubbin tells the Daily Dot. “When it finds two of them, it basically swaps the front of one sentence for the back of another. So, you could have ‘Hillary Clinton would totally win in 2016’ or ‘That hamburger was totally the greatest I’ve ever had.’ It would say ‘Hillary Clinton was totally the greatest I’ve ever had’ or ‘That hamburger would totally win in 2016.’”

When Dubbin actually put the bot into use, he discovered the content she produced was far from random. It sounded a lot like a teenage girl:

i can see why i don’t pay attention in this class. these power points are actually 10 people long every passing time

when my eyes get so watery while conversing about my dreams. is that what happens when some one is secretly 84 years old.

Taters doesn’t just produce her own content—she’s also programed to interact with people who tweet at her. Her response tweets work by grabbing the first noun phrase in the tweet sent her way and combining it with a random adverb phrase taken from elsewhere on Twitter. Surprisingly, it often sounds like a lucid, sensical response. As such, many people not only mistake Taters for a living, tweeting human being but end up engaged in a real conversation.

Taters isn’t the only bot Dubbin has made. Inspired by other bots like Professor Jocular, which finds the tweets with the most favorites, assumes their jokes, and then attempts to explain why those jokes are funny, Taters is just one a long line of Dubbin’s Twitter bot creations.

The Internet is kind of magical that way.

Amazing as Dubbin’s other creations are, the most direct antecedent for Olivia is her father, Ed Taters.

Ed Taters is a conservative political argument bot that smashes together random sentence fragments from the right-wing blog Red State, of which the name Ed Taters is an anagram:

why are they never willing to place a price on the politician and industry of the american immigrants? #tcot

in the gop, we perform though twice as voluntarily as the skull at 0.1016. #tcot

not whom the president’s done, but what i’ve done and why i have inserted up for gop. #tcot

karl marx around of the night tower into the marble hall, hurt down to show scaring the television funders and cold street. #tcot

Dubbin says that, in pretty much every way, Ed Taters is much less successful than his daughter. Even as a political pundit, he comes off more like an unhinged and grammar-challenged, albeit fairly conventional, conservative. His daughter, on the other hand, answered questions on political issues exclusively with nuggets of pure wisdom.

Dubbin declined to weigh in on Taters’s political judgements, preferring to “let her speak for herself.”  But I figured I’d take a shot at interpreting her answers to my political questions.

Remember, my interpretation is far from the official take—only Taters knows her true intentions:

Analysis: As the election comes down to the wire, campaigns are going to dive really low with nasty, personal attacks. Viewed as pure political bloodspot, watching it happen is going to be a lot of fun.

@ASankin Mitch McConnell would secretly listen to it. i was weird.

Analysis: Recent polls may show McConnell pulling ahead of his Democratic challenger, but the Senate Minority Leader should maintain an air of confidence while secretly kicking his campaign into panic-mode overdrive. Getting complacent could result in the type of unexpected upset that toppled House Majority Leader Eric Cantor.

Analysis: Clinton’s 2008 primary campaign against Barack Obama ended in a bitter fight full of barely coded racial rhetoric that was, as Taters aptly puts it, “incredibly tone deaf.” For the former secretary of state to succeed in 2016, she’s going to have to surround herself with a campaign staff that will steer her away from making the same type of mistakes.

@ASankin the nomination will completely miss this city and its people. #stockholm

Analysis: If anyone is able to give Hillary a serious run for her money, that person isn’t going to come from the Washington establishment. Maybe former Montana Governor Brian Schweitzer or Massachusetts Senator Elizabeth Warren.

@ASankin Attorney General would so skip my psychology class tomorrow, but i have a test ….

Analysis: The GOP is unlikely to make the confirmation of anyone Obama nominates for attorney general a pleasant experience. Sen. Ted Cruz (R – On TV) has already threatened that the White House should not even think about trying to get someone confirmed during the upcoming lame duck session. Selecting just the right person and then positioning her or him such that not only will their nomination get through but also paint the Republicans as obstructionist in the eyes of the voters will undoubtedly be a test of the Obama administration’s political mettle.

@ASankin ranking were the first people there. it’s not a competition. in fact it’s actually really annoying and pointless.

Analysis: Too often the media treats political prognostication as a competition. No one knows what will happen in the future, the goal is to inform the public about what we know today.

@ASankin ISIS will can’t figure out why people so damn ignorant.

Analysis: If you’re ignorant enough of American military history to think the fight against ISIS won’t gradually expand to include a sizable contingent of ground troops, well, I have some beachfront property in Arizona I think you might be interested in.

@ASankin November are the same word

Analysis: No, the American political system is fundamentally broken and thinking it’s possible to fix the dysfunction in Congress by putting a new team in charge is hopelessly naïve. The mind-numbing, pandering, disgusting silliness of the election season is a symptom of the dire need for deep, fundamental reform.

@ASankin next would define this as a bad week.

Analysis: At this time last year, net neutrality was the law of the land. A judge’s ruling in January is what struck those rules down and kicked off the whole current debate. Taters predicts the FCC is going to do whatever it takes to get back to the status quo circa 2013.

@ASankin victory would choose a football player without hesitation

Analysis: The NFL has been having a rough time of late. But, as Taters implies, will likely get through it as popular as ever. The same could be said for a Taylor Swift political campaign. Sure, there are skeletons in the pop star’s closet that’ll come out, but her victory is all but assured.

@ASankin Scott Walker was the highlight of my day.

Analysis: Opposition to Walker has fired up Wisconsin’s Democratic base as nothing else has in a least a generation. Burke may take the union-busting Koch-fiend down, but the state party’s fundraising machine will miss him when he’s gone.

@ASankin advantage would be bawling my eyes out. this is unbelievable

Analysis: Talking about the fight against ISIS as if it were another Joe Biden gaffe minimizes the atrocities the organization committing in Iraq and Syria. Some things are bigger than petty, short-term domestic politics. Try to have a little perspective, geez.

Analysis: The changes Obamacare brought to the U.S. healthcare system will soon be so integrated that people will no longer see a difference between Obamacare and healthcare in general. Running against Obamacare is already losing its juice. This year will be the last election where it’ll be an issue.

Analysis: Voters don’t really care about campaign finance. They just want the government to provide a chicken in every pot, a Predator drone above a Pakistani village, and a joint Daily Dot-Rooster Teeth video series about esports on every computer screen.

Analysis: Taters predicts the GOP nominee will be a dark-horse outsider with undeniable sex appeal and a strong connection to Israeli Prime Minister Benjamin “Bibi” Netanyahu. Since basically everyone on the Republican side would throw their own mothers in front of a moving train to give Bibi an uncomfortably long hug, just keep an eye out for someone hot.

@ASankin presidential run are the only way you can reliably beat a person at low percents in smash 4. spikes are really hard to do, though.

Analysis: We’ll put her down for “maybe.”