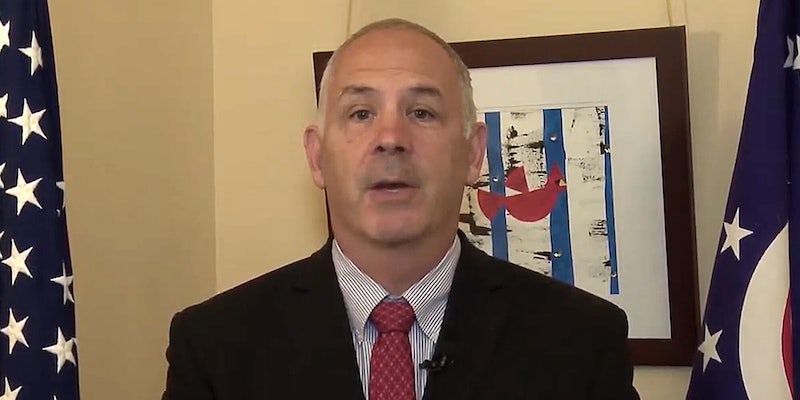 The lawmaker is also an emergency room physician.

State Sen. Steve Huffman (R-Ohio) is under fire after questioning whether the “colored population” was hit harder by the coronavirus due to less stringent handwashing.

The senator asked the question during a meeting in the Ohio’s Senate Health Committee. Huffman, who is also an emergency room physician, wanted to know why the coronavirus is disproportionately hitting the Black community.

“Could it just be that African Americans or the colored population do not wash their hands as well as other groups or wear a mask or do not socially distance themselves? That could be the explanation of the higher incidence.”

In response, Ohio Commission on Minority Health Director Angela Dawson told Huffman “that is not the opinion of leading medical experts in this country.” She also noted that due to the coronavirus’ impact on the respiratory system, people with chronic conditions are inherently at more risk.

“He highlights what racism is from a systematic perspective. He’s a full legislator but beyond that, professionally, he’s a doctor,” Howse told the Columbus Dispatch. “Do you think that someone who acknowledges the ‘coloreds’ is going to give the love and care that people need when they come through those doors?”

Howse noted that the stereotypes connected to his language—particularly the idea that “Black people are dirty”—have been used for centuries to justify systemic oppression, white superiority, and Black oppression.

“The fact that a well-educated legislator, a vice-chair of the Health Committee and a practicing medical doctor would, in a public setting, nonchalantly use such antiquated terminology paired with a hurtful, racist stereotype all in one breath reflects how unconscious this problem of racism is for too many,” Howse said in a statement Thursday morning.

The caucus is using Huffman’s racist language as an opportunity to urge legislators and their staff to begin racial equity and implicit bias training.

“Regrettably, I asked a question in an unintentionally awkward way that was perceived as hurtful and was exactly the opposite of what I meant,” the senator said. “I was trying to focus on why COVID-19 affects people of color at a higher rate since we really do not know all the reasons.”

Many of Huffman’s colleagues accepted his apology––but not everyone was ready to forget his words. Following the comments, the legislature began considering a resolution to declare racism a “public health crisis.”

In response to the resolution, Rep. Nino Vitale (R-Ohio) posted on his Facebook page in opposition to the legislative reform proposed by the Ohio Black caucus. Underneath the photo posted of the Black caucus, Vitale claimed that he is “darker than MOST of the people in this picture.”

“Growing up in inner city Cleveland and Maple Heights, I was made fun of for my name for my race for my skin color,” Vitale wrote. “I was spit on, beat up. I was called greasy Italian. I was told I don’t belong here in this country. I’ve heard it all.”

When asked about the post, Vitale attempted to defend it.

“Do you have any idea about where I grew up or my past history? Look, their resolution is about black and brown people,” he told the Dayton Daily News. “I’m a brown person. I have a varied opinion on it. I don’t disagree that there are problems in our society. The question is how do we solve them.”

“I will let you know why he did it,” she said. “It’s an undermining of notion that racism exists.”