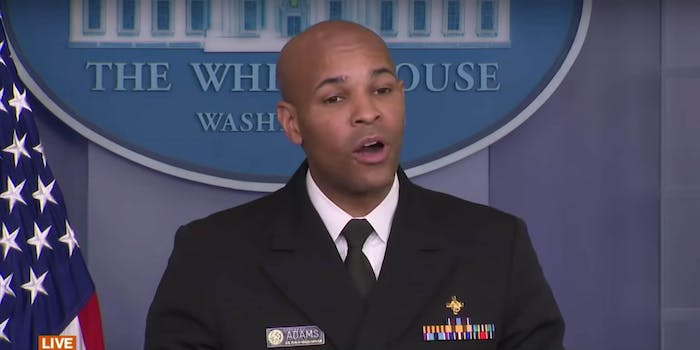 He raised eyebrows when he told people to do it for their 'abuela, grandaddy, Big Mama, and pop pop.'

Speaking at the day’s White House press conference alongside the coronavirus task force, Adams addressed concerns over the disproportionate effect COVID-19 has had on communities of color.

“It’s alarming but it’s not surprising that people of color have a greater burden of chronic health conditions,” Adams said. “African Americans and Native Americans develop high blood pressure at much younger ages, and it’s less likely to be under control and does greater harm to their organs.”

But the speech quickly raised eyebrows after the topic switched from health issues facing minority communities to calls for people of color to “avoid alcohol, tobacco, and drugs.”

The matter was made worse after Adams, according to criticism online, pandered to communities of color by telling them to do it for their “abuela,” “grandaddy,” “Big Mama,” and “pop pop.”

PBS reporter and White House correspondent Yamiche Alcindor was one of the first to push back on the remarks, arguing that many found the language “highly offensive.”

When asked by Alcindor whether he believed his wording was inappropriate, Adams defended his remarks by stating that such language is used in his own family.

“We need targeted outreach to the African American community, and I use the language that is used in my family,” Adams said.

The issue ultimately led the term “Big Mama” to become a trending topic on Twitter.

Many felt that Adams’ comments were insensitive and demeaning.

“The Surgeon General, making sure to check off all of the stereotypical ethnic names for our relatives,” Twitter user @mmpadellan wrote.

Unsurprisingly, views toward the statement appeared to be along partisan lines. Supporters of President Donald Trump pushed back on criticism of Adams and defended his speech.

“If you’re attacking the @Surgeon_General over him saying ‘Abuela.. Big Mama or Pop Pop,’ you’re an idiot. Thanks!” Twitter user @JoeTalkShow wrote.

Analysis from the Associated Press shows that “African Americans account for more than 40% of COVID-19 deaths in the U.S. where the race of victims has been made publicly known.”

“Data from states, cities, and counties show black people are regularly overrepresented compared to their share of the population,” the AP added.

The report points to, among other things, “inequity in access to health care and economic opportunity” for the Black community’s overrepresentation in coronavirus statistics.