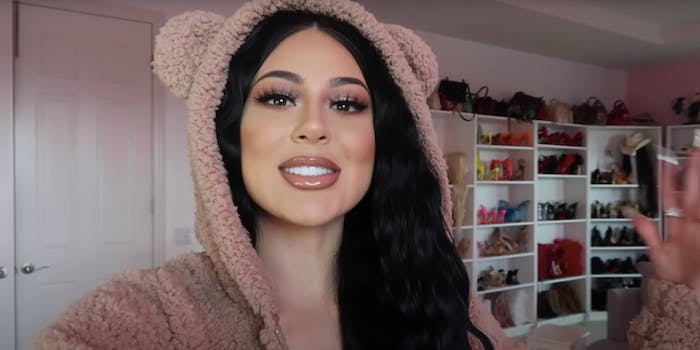 Jenny69 is canceled after defending her silence on Black Lives Matter

'To be honest, I can do whatever I want with my platform.'

People are canceling YouTuber Jenny69 after she uploaded and later deleted a video detailing why she temporarily left social media and hasn’t commented on the George Floyd protests.

In the video, the Latinx beauty influencer reportedly said that she felt a lot of pressure to post in support of Black Lives Matter and didn’t post a video about the movement because she was going through “personal issues.”

“Honestly, this is my channel, this is my life, these are my emotions. This is my platform, and to be honest, I can do whatever I want with my platform,” she said. “If you guys feel some type of way about it, then grow your platform and talk about it [the Black Lives Matter movement].”

The YouTuber is known for her beauty company that sells fake eyelashes, Baddie B Lashes. She’s also known for selling Spanish-language merchandise, like handbags that say “chingona” and long-sleeved shirts that say “don’t be his pendeja.”

People, especially Latinxs, were enraged by her comments, saying she doesn’t fully represent the community. One Twitter user said that Jenny69 should have stepped up in support of the protests because the fight against racism “is our fight too.”

“Jenny69 has never and will never be a representation of our Latino community,” Twitter user @xomdg1 wrote. “The privilege to come out with that video and say that the BLM movement was a reason for a ‘break’ screams privilege. It’s embarrassing.”

In response, some people argued that Jenny69 does represent a segment of the Latinx community.

“Don’t say Jenny69 doesn’t represent the Latinx community because she does represent a portion of it,” a Twitter user wrote. “She’s representative of the colorism, white privilege, and lack of allyship and recognition for BIPOC.”

People began pulling out the receipts to discuss other times she’s stayed silent on issues important to the Latinx community. For example, several Twitter users pointed out that she was notably quiet during highly publicized U.S. Immigration and Customs Enforcement raids. Instead, she allegedly promoted her concha and Flamin’ Hot Cheetos merchandise.

Twitter users said Jenny69 deserved to be canceled a long time ago. As proof, they shared a video of her talking with her husband about “smacking the sh*t” out of her autistic son.

Jenny69 has yet to respond to the cancelation, which is making her name trend on Twitter. However, it appears like she’s been receiving criticism for her silence for a while now. About two weeks ago, she posted a screenshot of a donation to the Minnesota Freedom Fund, adding the comment, “And yes I did donate last night!”