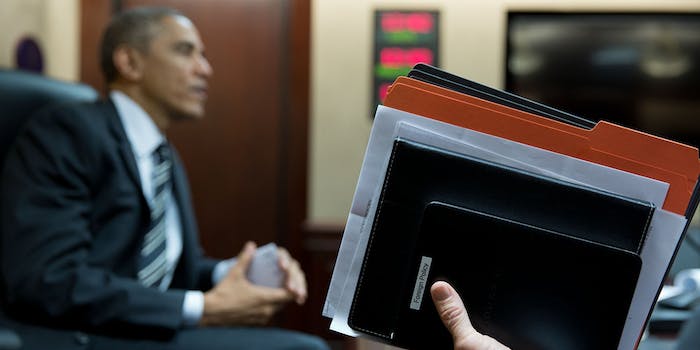 54 things to remember about President Obama on his 54th birthday

1. All the times he's been thanked.

President Obama turned 54 years old on Tuesday. Here are 54 things we’ll always remember about his presidency, for better or worse:

8) The Affordable Care Act, the most efficient system ever devised for killing old people to make room for all the anchor babies that has also  saved over 50,000 lives and reduced healthcare costs by $15 billion dollars

15) Improved race relations in the U.S.

16) Destroyed race relations in the U.S.

21) First president since Nixon to have halfway decent jump shot

32) Secretly minted trillion-dollar coin. Allegedly put in back pocket in case of emergency

33) Improved relations with both Cuba and Iran, moves which subsequently improved ratings for Fox News

38) First president since Truman to admit he actually likes rap

41) First black president to be advised maybe not to dance in public anymore—you know, just a suggestion

Proud to be the first American President to visit Kenya. Happy to see family, and to talk with young Kenyans about the future.

43) First sitting president to be asked, literally, anything

47) Secretly smoked cigarettes literally every second of every day

48) Saved entire global economy or whatever

Welcome to @Twitter, @POTUS! One question: Does that username stay with the office? #askingforafriend

Good question, @billclinton. The handle comes with the house. Know anyone interested in @FLOTUS?

51) Got one solid night of sleep in seven years