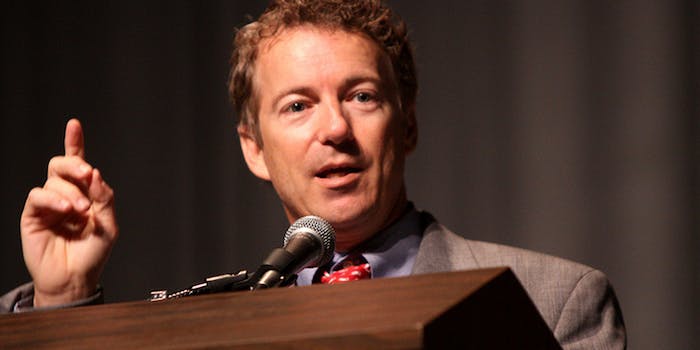 The NSA's next legal battle could come in the form of a massive class-action lawsuit.

Paul said he actually started collecting signatures for a class-action lawsuit about six months ago and more than 100,000 people have signed up to join the suit.

He said the basis of the suit is the Fourth Amendment, which protects against unreasonable search and seizure and provides a constitutional right to privacy. The NSA spying program gained national attention in June after former contractor Edward Snowden leaked information detailing how the agency collects metadata (information on who, when, and where you’re calling) from millions of Americans’ phones.

“The question here is whether or not, constitutionally, you can have a single warrant apply to millions of people,” Paul said.  “So we thought, what better way to illustrate the point than having hundreds of thousands of Americans sign up for a class-action suit.”

The move comes on the heels of two conflicting federal court rulings on NSA spying practices.

On Dec. 27, U.S. District Court Judge William Pauley tossed out an American Civil Liberties Union complaint against the NSA saying the surveillance program was justified as a necessary tactic “to confront a new enemy: a terror network capable of orchestrating attacks across the world.”

But earlier in December in a different U.S. District Court, Judge Richard Leon declared there’s a “substantial likelihood” that the metadata collection practices are unconstitutional.

The rulings seem to indicate it’s only a matter of time before the U.S. Supreme Court will have to make a final decision on the legality of the NSA’s spying tactics.