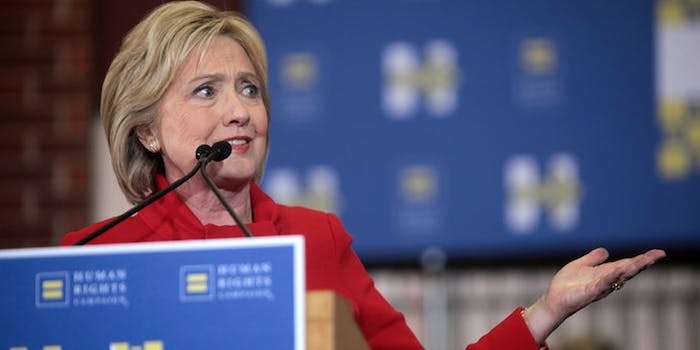 When you’re the secretary of state, checking your email isn’t always as easy as pulling out your iPhone and launching your mail app. Just ask Hillary Clinton.

During her time in the Obama administration, Clinton asked the National Security Agency for a secure “Blackberry-like” device to use in her office, reports CBS News. According to emails obtained by conservative watchdog Judicial Watch through a Freedom of Information Act request, the NSA denied Clinton her secure phone.

The newly released emails add another wrinkle to the controversy over Clinton’s use of a private email server, not the government’s system, during her tenure as secretary of state.

The issue largely centers around whether Clinton, now the Democratic presidential front-runner, or her staff sent classified information over the email system, which may have not met necessary security standards. While dozens of the emails have since been deemed classified, the Clinton campaign maintains that none of the information sent over the secretary of state’s email system was classified at the time it was sent.

The NSA’s denial of the secure phone is due to the State Department offices (also known as Mahogany Row) being declared Sensitive Compartmented Information Facilities, key government properties where no wireless devices are allowed for fear of hacking by sophisticated adversaries.

“Each time we asked the question ‘What was the solution for POTUS,’ we were politely asked to shut up and color,” Donald Reid, the State Department’s coordinator for security infrastructure, said in an email from 2009.

Clinton had a desktop computer in her office, but she preferred to use her Blackberry for emails, the emails show.

The Clinton campaign did not return a request for comment.

The emails also show that former Secretary of State Condaleeza Rice was given a waiver to use a Blackberry in Mahogany Row, but those waivers were slowly phased out by the NSA because the waivers “expanded to an unmanageable number of users from a security perspective,” according to a released email.

Security professionals agree with the NSA’s decision to deny Clinton her secured device.

“This frightens me that it would even be contemplated, and that reportedly the previous administration had a waiver!?” Nicholas Weaver, a senior researcher at the International Computer Science Institute, told the Daily Dot in an email.

“The U.S. government has to deal with VERY advanced adversaries, the kind who will bug typewriters that are used to type up classified information,” Weaver continued. “The whole point of a SCIF is it is effectively a safety belt, preventing a huge amount of potential problems. Having mobile computers, with wireless communication, which go in and out of a SCIF … frightens me.”