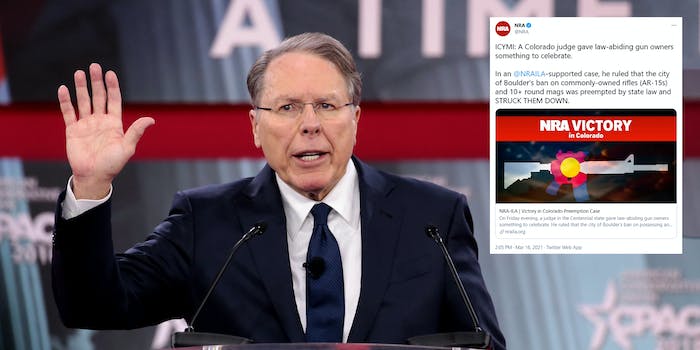 The NRA's old tweet was quickly unearthed in the wake of the Boulder shooting.

The National Rifle Association (NRA) celebrated an AR-15 ban being blocked in Boulder, Colorado just a week before a gunman killed 10 people in a city supermarket using a semi-automatic rifle.

A judge recently blocked Boulder from enforcing a ban on assault weapons within the city, the Denver Post reports. The judge, Boulder County District Court Judge Andrew Hartman, ruled that state law prohibited local governments from enacting bans on the possession or sale of firearms, according to the Post.

The NRA, in turn, decided to “celebrate” the decision by the judge to nix the bans by using all caps to note he “STRUCK THEM DOWN.”

The tweet from the pro-gun organization has since been unearthed by numerous people online in the wake of the deadly shooting.

“ICYMI: A Colorado judge gave law-abiding gun owners something to celebrate. In an @NRAILA-supported case, he ruled that the city of Boulder’s ban on commonly-owned rifles (AR-15s) and 10+ round mags was preempted by state law and STRUCK THEM DOWN,” the NRA tweeted on March 16.

Ten people were killed on Monday at a supermarket in Boulder. A suspect has been taken into custody, according to CBS News.

A senior law enforcement source told CNN that the shooter used an “AR-15-style rifle” in the shooting.

The NRA’s tweet celebrating the blocking of the ban was quickly unearthed on Monday and Tuesday, with people asking the organization if it was “still celebrating” in the wake of the mass shooting.

If that wasn’t enough, just hours after the shooting in Boulder, the NRA quoted the Second Amendment in a tweet.