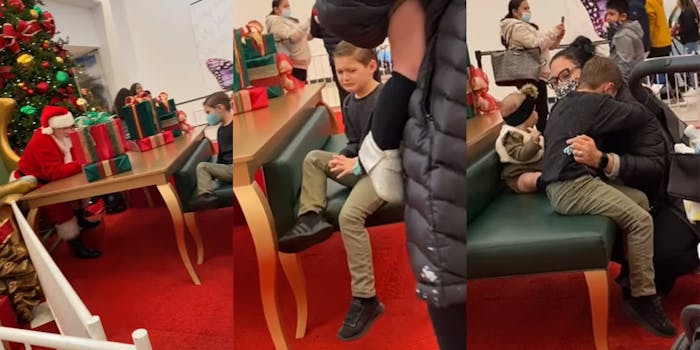 'Creating future school shooters one propaganda video at a time.'

If you’re wondering how A Christmas Story would go if it were set in 2020, look no further than the recent viral video of the National Rifle Association’s Santa Claus delivering an assortment of Nerf guns to a young boy’s house after a mall Santa denied his Christmas wish.

The Nerf Santa saga began on Dec. 6, when a viral video showed a Santa employee at the Harlem Irving Plaza mall in Illinois denying 4-year-old Michael DeCarlo’s request for a Nerf gun.

“Nope, no guns. Nope, not even a Nerf gun,” Santa tells DeCarlo. “If your dad wants to get it for you, that’s fine. But I can’t bring it to you.”

Santa offers to grant DeCarlo a bike or a set of Legos instead, but it’s too late. DeCarlo bursts into tears after being denied a Nerf gun, as his mother, Sabella, tries to console him.

The video drew intense backlash on social media, particularly from conservatives who did not approve of the North Pole trying to spread a liberal agenda. Harlem Irving Plaza apologized for the incident on Facebook the next day, announcing that it had dismissed the offending third-party Santa, and sent another Santa to DeCarlo’s house with a Nerf gun in tow to rectify the situation.

In a perfect world, Santa’s gesture would have put a tidy bow (pun intended) on a brief-but-tumultuous internet story. But this is hell, so of course, the NRA had to get involved.

On Sunday, the gun rights organization shared a video on social media of its very own Santa surrogate showing up to the DeCarlo residence with a veritable mountain of Nerf guns, all wrapped and tagged with NRA logos. “Mean Santa didn’t want to give me a Nerf gun for Christmas,” says DeCarlo, dressed in camouflage army fatigues. He then ravenously rips open his presents and proceeds to have a Nerf war with Santa inside his house.

“The North Pole doesn’t need any commies,” Santa says as he leaves the DeCarlo residence.

“Santa’s job is to make kids believe in the magic of Christmas, not lecture us on politics” DeCarlo’s mother tells the camera.  She adds that her son received “hundreds of Nerf guns” and “will be distributing those to other little patriots in need.”

“I’m a police officer, NRA instructor, and lifetime member of the National Rifle Association,” says DeCarlo’s father, Michael III. “And I gotta tell you, when the NRA reached out to us, we were shocked. Fellow patriots, thank you for all that you do to protect our rights and support us police officers.” He also announces that the NRA has made the youngest DeCarlo a lifetime member.

“Amazing, and one of the reasons I have faith in humanity! Love me a good Nerf war with my grandkids!” @italychickt tweeted.

“So many ignorant comments. Leftists can never be happy for anyone or anything,” @Keith_Ziegler67 wrote. “They want to ruin this child’s Christmas. Well I for 1 think this is a great video. Thank you.”

On the contrary, @rvantwillert wrote, “This just shows how rotten America really is. That the NRA is doing this. Same as giving the kid play cigarettes sponsored by the tobacco industry.”

“In the modern, actual world, many kids don’t play with guns because there are infinite alternatives and guns will evolve out with barbarians,” @Marycole121 wrote.

@MCMikeSkywalker had an equally grim outlook: “Creating future school shooters one propaganda video at a time.”