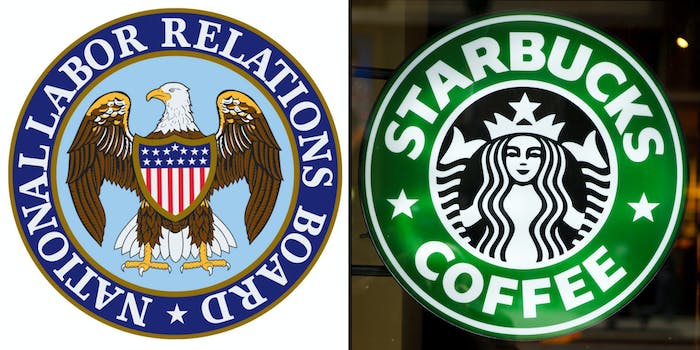 The National Labor Review Board filed a complaint against Starbucks for threatening employees and firing a union leader, according to More Perfect Union.

The complaint, filed on Wednesday, alleges the coffee giant engaged in coercive actions, interrogation, retaliation, and threats” against an employee in Phoenix. The letter sent to Starbucks by NLRB is not publicly available, but the Daily Dot has filed a Freedom of Information Act request to obtain it. This is the newest in a series of complaints from the NLRB against Starbucks, and the 8th complaint in the past two months against stores in the Phoenix region.

According to More Perfect Union, the most recent complaint says Starbucks illegally “interrogated” and “threatened” workers in Phoenix with retaliation for unionizing. The complaint goes on to say that the manager of the Phoenix Starbucks questioned a union leader, Laila Dalton, and her coworkers about their attempts to unionize in February, later saying that their decision to unionize “damaged trust” and that they “had to work to repair the trust and the relationship.” Dalton is 19.

In a viral video published last month, Dalton says she was written up retroactively for missing shifts and was later fired, an action she feels was retaliatory for her involvement with the Starbucks Workers United Union.

Last month, the NLRB filed a complaint concerning the store’s attempt to make her resign, citing the write-ups and pressure from management.

This newest complaint concerns her firing from the store. Dalton was also the subject of a separate viral video earlier this month in which she was accused of separate misconduct by human resources at Starbucks. The complaint also alleges that Starbucks mistreated an autistic barista, Tyler Gillette, who was promised minor accommodations. After the union went public, Starbucks backtracked and put Gillette on indefinite unpaid leave. The NLRB is asking Starbucks to compensate Gillette, cease union-busting activity, and read workers their union rights, according to More Perfect Union.

The NLRB has 279 open cases against Starbucks from this year alone, according to the NLRB website, a dramatic increase from last year, when NLRB filed just 18 cases against the company. The drastic uptick in cases follows a huge union push sweeping Starbucks stores across the nation, with nearly 20 stores around the nation voting to unionize and hundreds more scheduled to vote in the coming months.

The Daily Dot has reached out to Starbucks for comment.