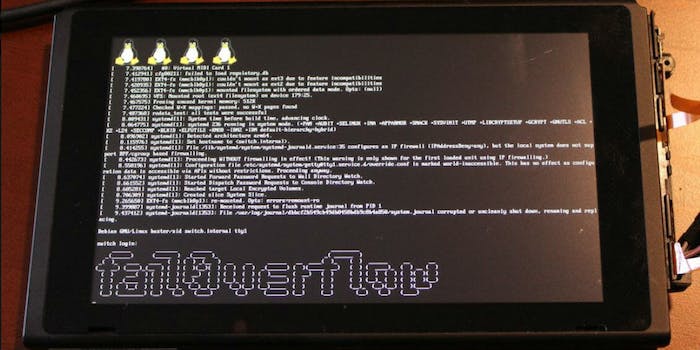 There's no easy fix for Nintendo, either.

A flaw in the processor powering all Nintendo Switch consoles allowed a hacking group to download Linux.

An image of the popular handheld console running Linux was posted to the group’s official Twitter page on Tuesday. In it, you can see an infected Switch running a boot sequence and user login. The exploit doesn’t require a modification chip and appears to only use the device seen in the image that is connected to one of the Joy-Con docks.

The group, called fail0verflow, were able to exploit the Switch’s boot ROM process and load up Debian, a distribution of Linux. The issue lies in the Nvidia Tegra X1 chip powering the Switch. When the console powers up, it reads a piece of code stored in read-only memory that contains instructions about the startup process.

Because it’s read-only, the exploit cannot be fixed in an over-the-air update somewhere down the line. There is also no way to skip the process since it’s the very first thing your system looks for when the power button is pressed.

That’s bad news for Nintendo. If it’s true, it means the only way to truly fix the problem is by releasing an updated processor.

Fortunately, failoverflow has not released the exploit publicly. We have reached out to Nintendo and will update this article if we hear back.