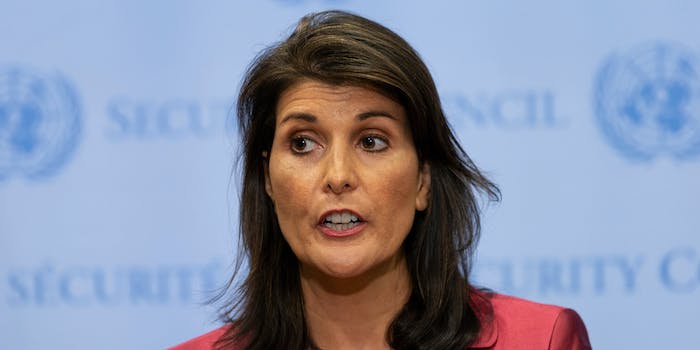 Gov. Nikki Haley slammed after tweeting that Kamala Harris is ‘unprofessional and unfit’

Former U.S. ambassador to the United Nations and current South Carolina Gov. Nikki Haley (R) slammed vice president Kamala Harris via Twitter for being “unprofessional and unfit” on Sunday. That led one person on Twitter to bring up incidents where Haley’s professionalism into question, including the time she chastised Popcorn Factory online.

Haley’s tweet came in response to Harris tweeting, “Enjoy the long weekend” on Saturday afternoon. Though Memorial Day is a traditional three-day kickoff to summer for many Americans, it’s also a somber federal holiday designated to the remembrance of those U.S. military members who died while in service.

Harris’s tweet garnered some direct criticism from conservative voices on the platform, including Jenna Ellis, part of former President Donald Trump’s legal team, who responded, “We enjoyed having a president and VP who respected America’s heroes.” (That immediately led to Brian Tyler Cohen and others sharing the Sept. 2020 Atlantic article contending that Trump called those who died in combat “losers” and suckers.”)

Haley, regarded as a potential Republican presidential candidate, chose to quote-tweet Harris, dismissing her as “unprofessional and unfit” for the tweet. As author Kurt Eichenwald bellowed, “So, what do you think of the ‘I’m great! Fallen soldiers would love me! Have a Happy Memorial Day!’ tweet from your God King?”

That led to some on Twitter to revive Trump’s 2018 “Happy Memorial Day” tweet, in which he tried to spin the holiday into a performance review heading into the midterm elections.

Others on Twitter questioned Haley’s professionalism in other ways, with one sharing a photo Haley posed for with conservative online personalities Diamond and Silk, cracking, “FLASHBACK: Nikki Haley poses with Unprofessional and Unfit.”

“Nikki Haley tweeted at the Popcorn Factory to complain about not getting her nephew’s birthday snacks on time in the midst of a deadly pandemic,” Watts shared, quote-tweeting Haley’s public complaint.

Watts, tweeting deep into Sunday night, found another Haley tweet of note, complaining about having to work the July 4 holiday in the midst of an unfolding international crisis.

“Nikki Haley tweeted her complaints about having to work during a holiday weekend when North Korea test launched an intercontinental ballistic missile capable of striking Alaska,” Watts observed, adding, “She was Ambassador to the UN at the time.”

While Haley did have a carefully-crafted tweet on Monday morning touting, “We are a blessed country because of those who have made the ultimate sacrifice in service to our country,” she also took to Twitter to share a selfie of her and her son.

The accompanying tweet read, “Thankful on this Memorial Day for the blessings of family and spending time with my little one,” accompanied by the lightly-used #notsolittleanymore hashtag.

That led one person to respond directly to Haley on the platform, noting, “It’s wonderful that you have a chance to spend extra time with your family,” before criticizing her.

“Maybe it’s not such a bad thing to ‘enjoy the long weekend,'” she scolded. “You owe VP an apology.”