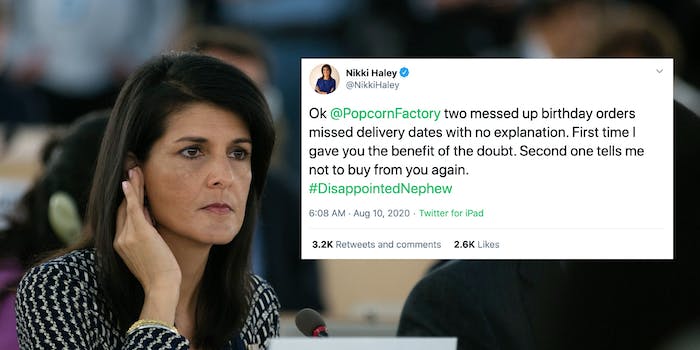 The former U.N. ambassador was not happy with the 'two messed up birthday orders.'

Nikki Haley, the former U.S. Ambassador to the U.N., is getting trolled online after blowing up at a popcorn company.

In a tweet on Monday, Haley called out The Popcorn Factory for two failed deliveries and what she claims was a disappointed nephew.

“Ok @PopcornFactory two messed up birthday orders missed delivery dates with no explanation,” she tweeted. “First time I gave you the benefit of the doubt. Second one tells me not to buy from you again. #DisappointedNephew.”

But missing popcorn quickly became the least of Haley’s worries after Twitter users began to mock her complaint.

Many suggested that the failed delivery could have been linked to the USPS, which critics claim has been purposely sabotaged by President Donald Trump.

“Glad to know you’ll blame a company for the delay of your fucking popcorn instead of the daily destruction of the USPS,” @TheRickyDavila said. “You Nikki Haley are a very disturbed individual.”

The ongoing coronavirus pandemic was also brought into the mix.

“Lost a loved one, home or job to coronavirus?” @HoarseWisperer asked. “Spare room in your thoughts for Nikki Haley who also suffered a tragedy. Her popcorn order was late.”

Others called out Haley’s record during her time in the Trump administration, accusing her of being soft on America’s adversaries.

“Nikki Haley, tougher on Popcorn Factory than she was on North Korea or Russia,” @AdamBlickstein said.

The Popcorn Factory eventually responded to Haley and apologized for the issue.

“Hi, Nikki! Thank you for reaching out to us. I am sorry for the inconvenience this has caused you,” the retailer wrote. “I will be glad to resolve this matter with you privately. Please send a private message on Facebook or Instagram with your order details, so I can further assist you.”

It’s unclear whether the former ambassador reached out to the company, but many used the opportunity to mock Haley for engaging in “cancel culture.”