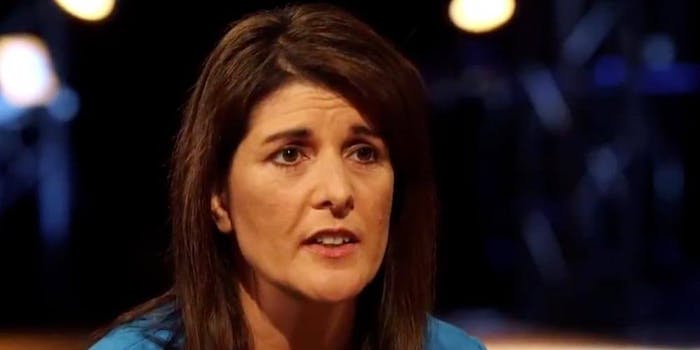 The Blaze via Jason Campbell

The ex-ambassador says the symbol was about service, sacrifice, and heritage until the 2015 mass-shooting.

Former U.S. Ambassador to the United Nations Nikki Haley has seemingly argued that the Confederate flag wasn’t an issue until Dylan Roof “hijacked” it.

In an excerpt from an interview with The Blaze’s Glenn Beck set to air on Saturday, Haley claims that the Confederate symbol merely represented service, sacrifice, and heritage until Roof murdered nine Black members of the Emanuel African Methodist Episcopal Church in 2015.

Nikki Haley says the Confederate flag was about "service, and sacrifice, and heritage" until Dylan Roof "hijacked" it pic.twitter.com/pqdhKIezRl

Haley, who was serving as Governor of South Carolina at the time of the mass-shooting, opted to have the flag removed from the State House. But not because the symbol was used by pro-slavery states during the American Civil War, but apparently because a picture of Roof with the flag sullied its image.

“Here is this guy that comes out with this manifesto, holding the Confederate flag, and had just hijacked everything that people thought of—we don’t have hateful people in South Carolina,” Haley said. “There’s always the small minority that’s always gonna be there. But people saw it as service, and sacrifice, and heritage.”

The former governor also blamed the media for making the flag and the shooting be “about racism,” despite Roof’s own manifesto explicitly stating that the attack was racially-motivated and the flag’s history as the symbol of slave states.

Following its use by the failed Confederate states, the flag was also adopted by the Klu Klux Klan in the early 20th century and continues to be used by the hate group to this day.

In recent years, the flag and other Confederate monuments across the country have begun to come down, although many still remain.

It was only just last year that an elementary school in Tennessee decided to finally remove a gymnasium mural depicting not only the Confederate flag but a lynching as well.