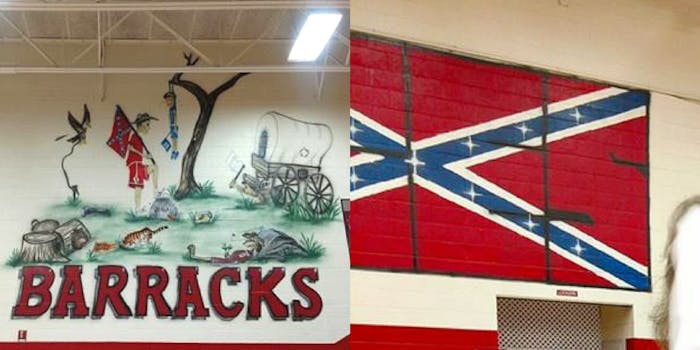 'How you feel about these racist symbols being on full public display where children can see them?'

After months of inaction, a Tennessee elementary school has finally removed its gymnasium murals depicting the Confederate flag and, more disturbingly, a lynching.

According to CNN, South Cumberland Elementary School in Tennessee, 100 miles east of Nashville, removed a gym mural of a man in red holding a Confederate flag with a white man in blue hanging from a rope attached to a tree. While the mural was “intended to depict an athletic team rivalry,” the imagery is a clear reminder of how Black people were enslaved and killed in this country.

David Clark, a janitor at a nearby school, began complaining about the mural, as well as a second mural of a Confederate flag, in December. But after months of calling and emailing the superintendent and school board, nothing had been done, so Clark took to Facebook instead.

Sharing two photos of the murals, Clark called for people to contact the school in a “respectful manner” to tell them “how you feel about these racist symbols being on full public display where children can see them.”

Darrell Threet, the school’s principal, told CNN that the murals have since been modified by removing the Confederate flag, and “modifying” the hanging mural, too.

“Removing it didn’t seem like a priority… but white supremacy in this country is becoming too organized and too emboldened to ignore something like this in our schools,” Clark told CNN said. “I am glad they got to painting, but I am not sure why they ever wanted lynching a part of their school spirit.”

These murals are in South Cumberland Elementary in Crossville. They are both in one public school elementary gym where…