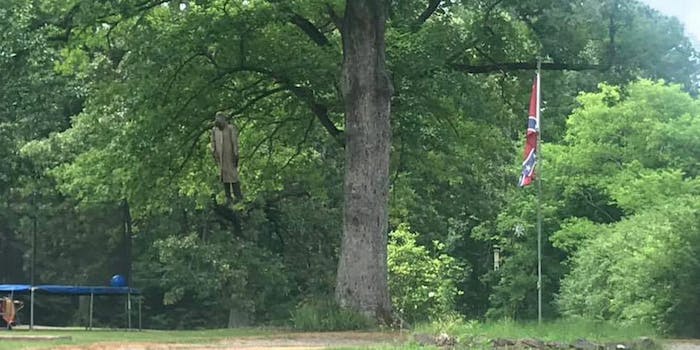 'She knows what it means.'

A woman has taken down a mannequin hung on a tree next to a Confederate flag in her home in Little Rock, Arkansas, after a video showing the distressing decor went viral, according to Fox16.

The yard fixture got traction on social media after someone reportedly shared a video of the setting on Facebook. The homeowner, who has not been named by news sources, said it was a decoration for Halloween.

“I saw a video of a noose with a person of color hanging from it and it’s kinda disturbing,” Ricky Allen, who lives nearby, told Fox16. “It’s kinda heartbreaking to know that neighbors in the neighborhood is like that.”

While the skin color of the mannequin is not entirely clear from the images shared, the hands and feet are seen wearing dark gloves and socks.

The homeowner told Fox16 it had nothing to do with race, and eventually took the mannequin down but refused to do it on camera.

“She knows what it means, so does everybody else around here,” another neighbor, Tracy Sims, told Fox16.

Journalist Mitchell McCoy shared images from the home on Wednesday.

“When has a confederate flag and someone hanging from a tree ever been a good thing in the history of this country?” one user commented.

McCoy said on Fox16 that people were driving by the offensive setting following the viral Facebook post, and people wondered how this went unnoticed for the seven months since Halloween.

Unfortunately, it’s far from the first time someone has ignored the significance of the noose and its association with lynchings. While it’s still often used as a tool for hateful and racist messages, it’s also used by people who aren’t bothered to understand the full ramifications.