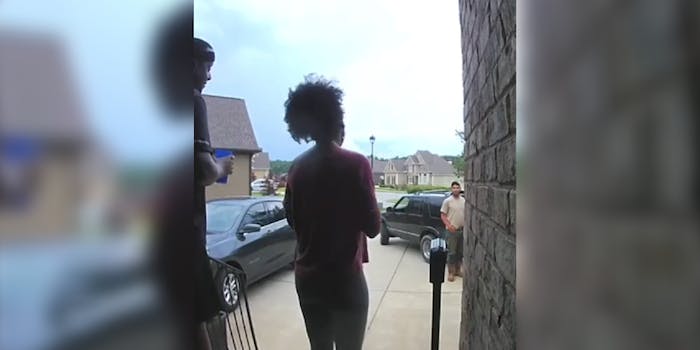 Contractor shows up to Black family’s home with Confederate flag, gets fired

'I didn't know the flag offended y'all.'

Allison and Zeke Brown, a Black couple, hired an independent contractor to fix the brakes on their golf cart. They decided the repairs could wait after seeing what he showed up to their home with: a massive Confederate flag flying from the rear of his car.

“Hi, you know what, I do apologize,” Allison tells the contractor, Michael, in the video captured on their Ring app. “I know you’ve come from a very long way, but we’re going to use someone else.”

Zeke wants to make sure the contractor knows exactly what Allison is upset about when he says, “She’s upset with the flag.”

“No, I’m beyond upset with the flag,” Allison clarifies.

Michael offers to take the flag down, but the damage is already done.

“No, you don’t need to take it down,” Allison responds. “You can continue to believe what you need to believe, sir. But no, I cannot pay you for your services. Thank you, have a good day.”

Michael told the publication that his siblings bought the flag from a flea market, and he’s not going to take it down since his siblings asked him to fly it.

“I don’t support slavery and neither do my siblings,” Michael said. “If (the family) wants to take offense, they can.”

Twitter user @tyrone345345 later posted the video to Twitter, where it amassed over three million views. People praised Allison for her calm and respectful response.

GOOD FOR HER! And she was incredibly polite about it to boot. pic.twitter.com/pxPlTVx9hM

Other users were pretty unhappy with the contractor.

“Would he had shown up to a white Jewish family with a swastika? The Confederate flag is a common white supremacist symbol of hatred of blacks. It represents racism, slavery and the country’s long history of oppression of black people,” one Twitter user wrote.

Oh hell nah. That’s a wholeass confederate flag from the Klan meeting they had last Tuesday

Zeke told Yahoo Lifestyle that he simply said to his wife, “God is testing me” as soon as he noticed the flag.

“The flag was absurd,” he said. “I had to walk back into the house to calm myself down.”

Zeke mentioned he hoped Michael would learn a lesson after being fired for the flag.

“I thought, ‘Maybe there is hope for someone like him or an opportunity to save him from this way of thinking,” Zeke said. “And I wanted that flag off my property–as one of the few Black families in our subdivision, what would the neighbors think of a Confederate symbol in our driveway?”