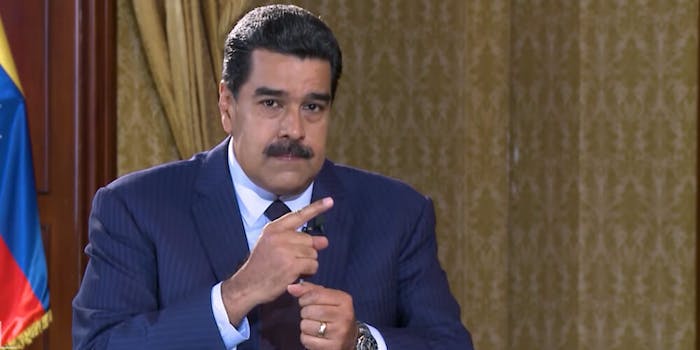 'It seems to me that if Twitter is going to suspend a world leader, it should announce why.'

Venezuelan President Nicolás Maduro’s English-language Twitter account was suspended earlier this week. It has since been reinstated, but that didn’t stop many from questioning the suspension.

“It seems to me that if Twitter is going to suspend a world leader, it should announce why,” Twitter user @RespectableLaw wrote.

The common consensus among people seems to be that if Twitter is going to suspend accounts of world leaders, it should at least do so consistently and announce the reason behind the suspensions publicly.

I don't even particularly like the bastard, but at least a press release or something. You don't get to have it both ways depending on who has power you want to twist in your favor, Twitter.

Shame on all your #Censorship!! https://t.co/GR2HFkGasC

“The account was reestablished after no violation of our policies were determined,” the spokesperson told the Daily Dot.

Twitter has long said that it would not block or remove controversial tweets from world leaders. Often times, the company has left up world leaders’ tweets even if they violate Twitter’s rules. The company has publicly posted this policy since January 2018.

“Blocking a world leader from Twitter or removing their controversial Tweets would hide important information people should be able to see and debate,” the company wrote in a blog post. “It would also not silence that leader, but it would certainly hamper necessary discussion around their words and actions.”

But in June, Twitter began giving hints that it was shifting its position. In another blog post, Twitter announced that it would start flagging some violent or abusive content from world leaders. If flagged, a notice would be placed in front of the tweet and users have to opt in to view the content. Despite this change in policy, Twitter did not say it would suspend world leaders’ accounts.

There is heightened controversy over the Twitter suspension because the Venezuelan government under Maduro has claimed that the U.S. is leading a coup against his government in order to control the country’s oil reserves.

The account in question is an English-translation equivalent to Maduro’s original.